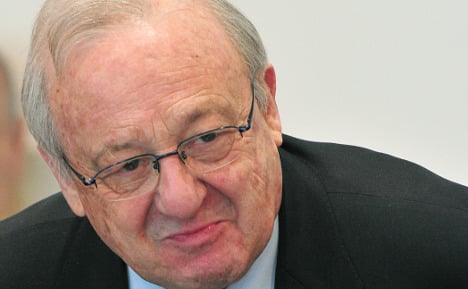 But the Federal Court of Justice called for clarification over whether Schreiber was actually liable to pay taxes in Germany and whether charges of bribery had, in fact, exceeded the statute of limitations.

At the height of the scandal in 1999, Merkel wrote an editorial in the daily Frankfurter Allgemeine Zeitung calling for Kohl to come clean and for the party to break with its murky past.

Merkel’s willingness to challenge her former mentor during the scandal rapidly inflated her meagre profile and she was elected head of the CDU the following year.

Schreiber was also embroiled in a scandal involving former Canadian Prime Minister Brian Mulroney, who admitted in 2007 that he had accepted $225,000 in cash from Schreiber after leaving office.

The former leader insisted this had been a “mistake,” not wrongdoing. He said he was paid to lobby foreign politicians to buy Thyssen light armoured vehicles that Schreiber was trying to have built in Canada.

Canadian federal police had first accused Mulroney in 1995 of accepting kickbacks from Schreiber for the purchase of Airbus jets for carrier Air Canada in 1988.

Mulroney subsequently sued the Canadian government for libel and, under oath, denied any illicit dealings with Schreiber.

He received a government apology and a $2.1 million settlement, and the case was closed.