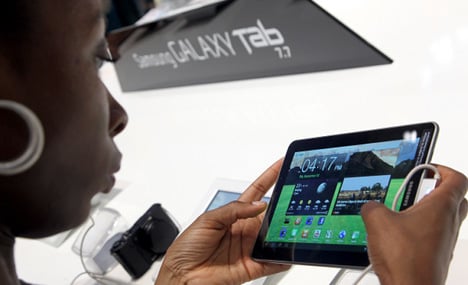 Samsung Sunday removed its Galaxy Tab 7.7 inch from the annual IFA show following an order from a district court in Düsseldorf banning sales and marketing, a company spokesman told AFP.

“Samsung respects the court’s decision … and therefore decided not to display any more the Galaxy Tab 7.7 in the IFA,” the company said in a statement.

Samsung however vowed to take “all available measures, including legal options” to defend its presence in the European market, saying the court ruling “severely limits consumer choice in Germany.”

Friday’s move by the Düsseldorf court follows an interim ban in late August on German sales of Samsung’s Galaxy Tab 10.1. That ban remains in force until the court makes its final ruling on Friday.

Samsung – the world’s second-biggest mobile phone maker – is embroiled in a series of patent lawsuits with Apple over designs and technologies in their smartphone and tablet computers.

Apple, in complaints filed to courts in several countries, requested a ban on the selling and marketing of Samsung smartphones and tablet PCs, which it said had “slavishly” copied Apple’s market-leading iPhone and iPad.