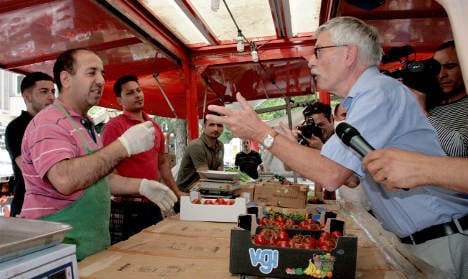 “Perceptions and realities are further apart than ever, one year after the release of the Sarrazin book,” Maria Böhmer told Tuesday’s edition of Berlin’s Der Tagesspiegel newspaper. “That is a result of the distorted picture painted by Sarrazin, which consciously blanks out the progress in integration that has been made.”

She said that many immigrants who were willing to integrate felt offended and excluded by Sarrazin’s contention that Muslims were largely incompatible with German society.

“We need a lively and objective discussion about integration. Neither horror scenarios nor rose-tinted visions help us get any further,” she added. “The aim has to be to strengthen trust between native-born people and immigrants.”

Sarrazin’s book Deutschland schafft sich ab – Wie wir unser Land aufs Spiel setzen or “Germany Abolishes Itself – How we’re putting our country in jeopardy” sparked a hurricane of media debate when it was released last year. It sold 1.3 million copies and made Sarrazin a ubiquitous guest on TV debate shows for several months.

The book also divided the country, sparking increasingly extreme criticism and support. Even one of Sarrazin’s biggest political supporters Heinz Buschkowsky, mayor of Berlin’s largely immigrant district Neukölln, told the Der Tagesspiegel, “Sarrazin pointed out problems that are unquestionable – but he also helped to polarize integration policy. The debate has become even more hysterical and inquisitorial in the past year.”

Hilmi Kaya Turan, spokesman for the Berlin Brandenburg Turkish Association (TBB), told the paper, “His book contributed to the general uncertainty of people with an immigrant background. They felt like they were being made scapegoats.”

Berlin Social Affairs Minister Carola Bluhm agreed: “The debate around Sarrazin’s book has damaged integration and hurt a lot of people, and it’s done nothing at all for our city.”

Sarrazin himself remains unrepentant one year on. In a recent interview for news weekly Die Zeit, he said the past year had made him “harder.”

“After the past year, I’ve started to understand how the Soviet Union forced false confessions from its prisoners in the Stalin era,” he said. “You only have to isolate people long enough and keep making accusations, and at the end they admit the craziest things.”

Sarrazin’s book has also had an effect on the academic studies, according to Klaus Eder, sociology professor at Berlin’s Humboldt University. He said statistical research has now become “more careful,” because Sarrazin had “abused” many statistics to support his theses. “The trends that Sarrazin describes don’t exist,” he said.

Eder said that since Sarrazin’s book was published, sociological studies now express more caution about predicting developments based on their statistics.