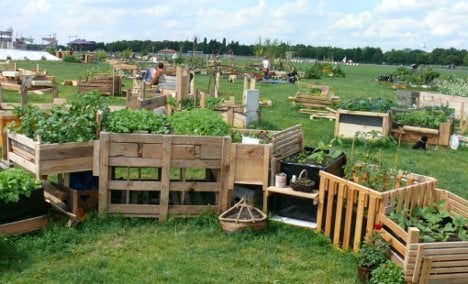 Launched by a dozen “pioneers” in April, the Allmende Kontor plot now has about 300 people growing fruit, vegetables and flowers between the former runways of the airport, which closed nearly three years ago.

Hot peppers, chestnut saplings, cosmos and millet now reach for skies once filled with Allied jets ferrying essential supplies to West Berlin during the 1948-49 Soviet blockade at the start of the Cold War.

The Nazi-built terminal, called by star architect Norman Foster “the mother of all airports,” forms a sweeping crescent in the distance as hobby farmers of all ages and stripes tend to their crops.

Gerda Muennich, one of the organisers of Allmende Kontor, which takes its name from a medieval form of community gardening, says the initiative is also meant to reflect the diverse cultural makeup of the surrounding neighbourhoods.

“One of our members plans to break the Ramadan fast with a big picnic here,” the 71-year-old told news agency AFP, referring to the Muslim holy month, on a tour of the 5,000-square-metre (54,000 square-foot) garden.

Just beyond the airport fence is Neukölln, a working class district of Germans, Arabs and Turks undergoing rapid gentrification.

The closing of Tempelhof to make way for an expanded facility on the city’s outskirts has fuelled the transformation of the surrounding area as the noise and pollution of air traffic have given way to a windswept park.

For now, the shuttered airport is an undeveloped space nearly as big as New York’s Central Park and Berliners have embraced it as a playground, cycling and rollerblading down the old runways and barbecuing on a designated meadow.

Off to one side is an old American baseball diamond with a fading scoreboard reading “Home” and “Away” where GIs used to round the bases.

Many of the city farmers fear that investors will leap on the prime real estate when their lease is up, forcing them out. Much of the site is to be landscaped to host the International Garden Show in 2017.

The garden, developed based on organic principles, is comprised of elevated plant beds and plywood frames. No construction is allowed that cannot be removed at a later point, Muennich said.

The organisers have received only a three-year grant to use the land with the option of a three-year extension, as the city develops a long-term plan for the former airport.

Furthermore, some hobby gardeners are leery of digging in the soil for fear it is contaminated with plane fuel or even littered with unexploded Allied bombs from World War II.

Community gardens developed in big cities in part as an anti-poverty tool in blighted neighbourhoods and have swept the globe as the world’s population grows more urban.

“Tempelhof is a spectacular place to practice urban gardening because it attracts so much attention,” she said.

“You can really see Allmende Kontor as a political act because as politicians have lost credibility, people want to redefine city spaces on their own terms. It’s become cool among young people to garden, to make their own jams – to produce and not just consume.”

She notes the Tempelhof project stands in contrast to Germany’s strictly regulated traditional allotments because it is open to everyone. It already has a lengthy waiting list for planting beds.

City farming has grown trendy in Berlin’s vast undeveloped spaces, many left from the 1989 fall of the Wall.

The Princesses’ Gardens, one such project a stone’s throw from the former border between West and East Berlin, has proved wildly successful since its launch two years ago and inspired start-ups across Germany.

At Tempelhof on a recent summer’s day, Soroush Hosseini, a teacher who arrived from Iran in 1977, was tending to her ambitious patch of lychee, avocado, lavender and herb plants.

“I discovered this place when I was out taking a walk. My plants on my balcony at home have too little sun and now they have space and I have a clear view to the horizon,” the 60-year-old said with a smile.

“But the best part is the people, who are much more important to me than my little patch. You make friends here without having to do much — we sit around and talk about the world and politics.”

Osman Dogan, a cook from Turkey who has lived in Berlin for 13 years, set up his garden with rocket salad, parsley, beans and peppermint two months ago.