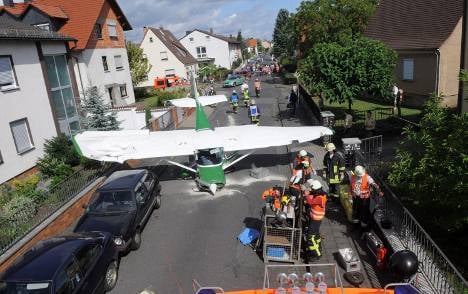 The couple escaped with minor injuries from the spectacular incident, and no-one was injured on the quiet residential road, public broadcaster Bayerischer Rundfunk.

The Cessna plane was on its way from the state of Hesse to Aschaffenburg in Bavaria when a defect forced the pilot to use the narrow road as a runway.

During the hair-raising manoeuvre, the plane scraped a roof, removed a satellite TV antenna, and destroyed a street lamp. It was also severely damaged on impact.

A police spokesman said the 47-year-old pilot and his wife were treated in hospital. Police, who were called in by local residents, temporarily blocked off the road until the plane could be cleared. Experts from the German Federal Bureau of Aircraft Accident Investigation were also called in.

The couple had apparently chartered the plane for a pleasure tour.