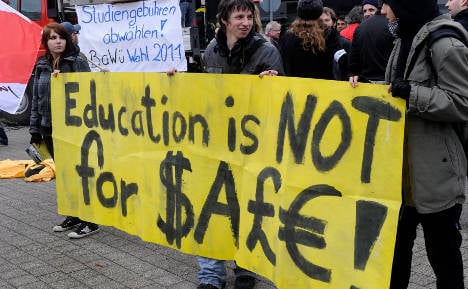 Although the sums charged may seem risible for someone who has left a British or American university tens of thousands of pounds or dollars in debt, the subject of tuition still raises passions in Germany.

Fees are limited to a maximum of €500 a semester, but the principle of higher education being available for free to all is still firmly anchored in the German psyche, according to Jenny Richter, from Hohenheim University’s marketing department.

A project there has tracked the acceptance levels among students for tuition fees across the country since they were made possible in 2007.

The information shows that 15 percent of those surveyed supported fees before they were introduced. Today that figure is 19.2 percent. But the share of students who opposed tuition fees has also risen over the last five years, from 60 percent to 64 percent.

The difference is that the number of students who were undecided on the matter has shrunk – showing the issue polarises students, said Richter.

Universities have handled the matter badly, she suggested. “They did not know how to use the money appropriately and did not inform their students adequately,” she said.

State governments, responsible for education matters in Germany, make the decision whether to charge students tuition fees and in some cases set the rates. The promise had been that university budgets would not be reduced when student fees were introduced.

“The problem was that the universities did not ask the students what they should do with the money,” said Richter. “But we saw a lot of spending on libraries, opening them for longer or increasing stock – and that was not as important for the students as more teachers or better infrastructure.”

Richter said students felt they were paying €500 a semester that they had not had to pay before, but were not seeing anything get better for the money. “This left them dissatisfied and led to protests,” she said.

She said that at least in Germany’s private universities the students could clearly see what they were getting for their money – with fees more comparable to British or American levels. State-funded universities often have hundreds of students attending lectures, while private universities have enough teaching staff – and few enough students – to have classes of around 50.

“The fear was that student tuition fees were also being used to fill budgetary holes and cover heating bills for example,” she said.

“Then there was also the case of one university which did not spend its student fee money at all.”

Since then many of the seven states where fees were charged have experienced changes in government, with incoming politicians promising to abolish the tuition fees.

Hesse and Saarland stopped shortly after introducing the fees, while North-Rhine Westphalia is due to follow them this winter. Baden-Württemberg’s new Green-led coalition will stop them as of next year, as is Hamburg.

That leaves only Bavaria and Lower Saxony still set on tuition fees.

“This year we saw the greatest acceptance of fees where they are still being charged but will be abolished. In Lower Saxony 10 percent of students are in favour of the fees while in North-Rhine Westphalia the figure is 25 percent,” she said.

“I think that is because although at first fees were introduced and the money not used properly, this has changed. Students are getting more information about where their money is being spent and they see an improvement in conditions. They then fear that if the fees are abolished, conditions will worsen.”

That concern is expressed by just over 40 percent of students in North-Rhine Westphalia and Baden-Württemberg, where abolition of fees is imminent.

Whether those fears turn out to be justified will depend on how much money the states concerned are able or willing to add to the universities’ budgets to compensate for the lack of income from fees.

But even though some universities may well see fewer teachers as a result, Richter said she could not imagine conditions getting bad enough to persuade students that tuition fees should be reintroduced.

One of those adamant students is Nadine Berger, a Hamburg resident who belongs to a group against fees.

She told The Local the principle of free further education was crucial and a part of investment in people. She said an educated population benefited all and that it was important to keep education free so that those from unprivileged backgrounds could take part.

Berger also rejected the idea that universities needed the money from student tuition fees, particularly in the light of shrinking state budgets.

“There is enough money there,” she said. “You can compensate the loss of student fees from the state budgets, it is a question of setting priorities.”

Yet Professor Hermann-Josef Buchkremer, director of the freshman institute and former rector of Aachen University of Applied Science, said it was a “big mistake” that the universities in Germany did not charge fees.

“The universities have no money,” he said.

He said because German universities do not charge fees, they cannot invest in education conferences abroad, which isolates them and limits them to the domestic national norms as far as educational methods go.

“The universities cannot invest because they don’t get any money (from fees) that they could invest abroad,” Buchkremer said. “The passion to control is greater than the passion for innovation.”

German student fees never came close to the giddy heights of Anglo-American tuition costs, perhaps making it easier for the country’s universities to survive without them. Of course, now that the political will to impose them has all but disappeared, they will have little choice.