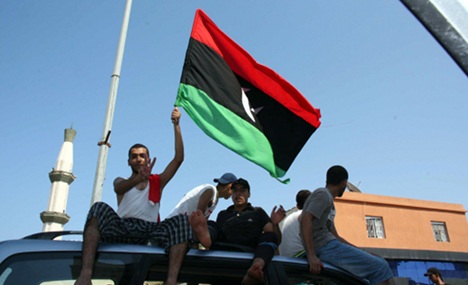 The statement by Westerwelle to public broadcaster ZDF came amid concerns about Germany becoming involved in a quagmire in Libya following what appeared to the be the imminent collapse of Qaddafi’s regime.

“It may be that Libya is developing into the new Somalia,” said Peter Scholl-Latour, a former journalist and one of German’s most respected Middle East experts. “The Islamists are waiting.”

Although the German military has not been directly involved in the NATO military campaign to weaken Qaddafi’s regime, it appears possible that peacekeeping soldiers could eventually be sent to the country.

Defence Minister Thomas de Maizière suggested they could be used to maintain peace in Libya and help prop up democratic institutions.

Westerwelle avoided speaking directly about German military involvement and said Libyans must decide their own future.

As of Tuesday, however, much remained unclear and in flux. Despite reports of his capture, one of Qaddafi’s sons visited journalists overnight and was taking them on tours of the capital city Tripoli.

And in the face of the rebellion’s lightning march into Tripoli, NATO members, including Germany, were mulling what to do next – including the possibility of the transitional government will soon be asking for direct military assistance.

“NATO should consider very carefully how it would react in such a case,” Ruprecht Polenz, a member of Chancellor Angela Merkel’s conservatives and the chairman of the Bundestag’s foreign affairs committee, told the Passauer Neue Presse newspaper.