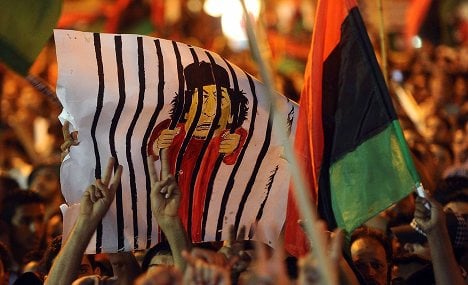 “When there are requests about the Bundeswehr, we will examine them constructively, as we always do,” de Maizière told the Rheinische Post newspaper without elaborating further.

The Interior and Foreign ministries also declared a willingness to consider military assistance and said they were mulling how else to help stabilize the country after Qaddafi’s departure.

Berlin irked its closest allies this spring by refusing to back a UN resolution authorizing military action against Qaddafi. However, German officials signalled early on they would consider sending peacekeepers and civilian reconstruction personnel to help Libya rebuild once Qaddafi was finally out of the picture.

On Monday it appeared that Qaddafi forces were close to total defeat. Rebels had surrounded his main compound in Libya’s capital city of Tripoli, captured one of his sons and put another one under house arrest. It wasn’t clear where the mercurial dictator was, but he has been repeatedly sending out radio messages urging Libyans to support him.

In a lightning movement into Tripoli over the weekend, the rebel forces took over almost all of capital, while Qaddafi’s forces continued to control about 10 percent of the city. The rebels, backed by strong support from Western governments, now control almost all of the country.

Germany’s involvement in Libya has been fraught with controversy. Initially Germany refused to participate militarily in NATO air strikes, isolating itself within the transatlantic alliance and earning the ire of allies including the United States, Britain and France.

But German officials recently faced criticism at home after it emerged that Bundeswehr personnel were helping identify attack targets in Libya for NATO to strike. The Green party said the soldiers’ involvement was illegal since it lacked parliamentary approval.

On Monday, Germany reiterated its call for Qaddafi to resign.

was clear Libya had reached a “turning point.” He said Qaddafi had lost all vestiges of legitimacy.