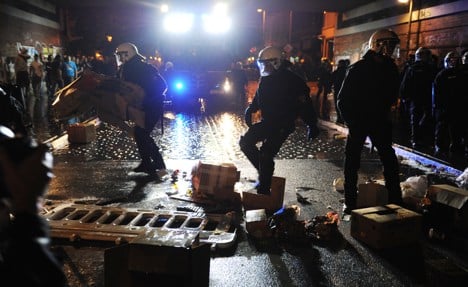 Masked people lit a number of fires on the streets of the city, while police used three water cannons during the night. Five policemen and a journalist suffered minor injuries, while 31 people were detained, and ten taken into custody.

The clashes followed the peaceful Schanzenfest, an annual left-wing alternative street party celebrated by 10,000 locals and visitors in the Schanzenviertel district of Hamburg. But young people began throwing fireworks later in the evening and set fire to piles of rubbish on the roads. Passers-by put the fires out.

A branch of the Sparkasse bank was attacked not longer afterwards, with around 20 rioters smashing up the entrance with iron bars. Several more fires were also lit.

A video journalist filming one of the fires was attacked by a group of rioters who chased him into a cafe, trampled on his camera and hit him in the face.

The Schanzenfest has been running since 1988, and while the festival itself is almost always peaceful, violence has become traditional in the night following it. In 2010, 14 people were injured and 42 arrested.

Hamburg police, who brought in hundreds of officers from several states in preparation for the event, received praise from the city’s Interior Minister Michael Neumann, who said they had successfully prevented much worse violence.