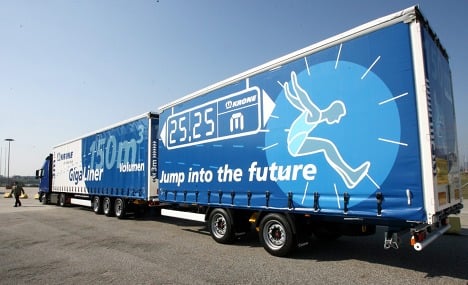 The field trial of the trucks will take place in seven of Germany’s 16 states over five years if approved by the Transport Ministry, the Frankfurter Rundschau newspaper reported on Wednesday.

The participating states would include Schleswig-Holstein, Lower Saxony and Thuringia, as well as Bavaria, Hamburg and Hesse.

The test, however, is being opposed by a coalition of groups, including the ACE automobile club and the German Police Union (DPolG), who both say the trucks will increase danger for regular drivers and damage fragile roads.

“Gigaliners are nonsense,” DPolG head Rainer Wendt told the Bild newspaper. “Our roads are not built for these monster trucks, nor are drivers trained to share the road with them.”

The Pro-Rail Alliance, which lobbies on behalf of the railroad industry, is also opposed to the trucks because of concerns of competition with cargo trains.

“They are of interest to our clients and to society in general,” Fabrice Piombo, a spokesman for Renault Trucks, told news agency AFP at a trade fair in Hannover last year.

Such vehicles are legal in places like the United States and Australia, but are still largely frowned upon in much of Europe, other than the Netherlands, Finland and Sweden, where they have long been legal.

If the field trial is successful, it could pave the way to eventually allowing the trucks on all German motorways.