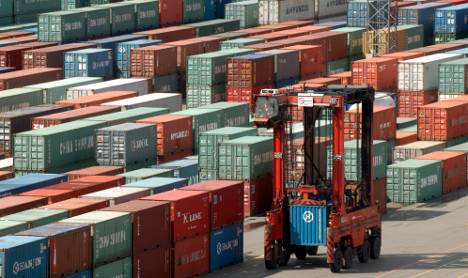 Analysts polled by Dow Jones Newswires had forecast 0.4 percent growth for the second quarter in the eurozone’s top economy as the group grapples with a crippling debt crisis.

“The dynamism in the German economy has cooled significantly since the robust start to the year,” the federal statistics office (Destatis) said in a statement.

It revised the first-quarter growth figure down to 1.3 percent from the 1.5 percent originally reported.

Destatis said the 0.1 percent growth in the second quarter compared to the first quarter came based on only anaemic expansion in exports, the backbone of the German economy.

Imports rose in the second quarter more than exports, undermining the growth figures, as consumer spending and investment in construction also slipped.

The figures were stronger in a year-on-year comparison, with gross domestic product rising 2.8 percent in the second quarter.

In late May, Merkel had said it was likely that gross domestic product would rise more than three percent this year, in line with the forecasts of most economists and key institutions.

The government’s official forecast, reported in April, remains at 2.6 percent but economic data since then had made that prediction seem timid.

Chancellor Angela Merkel, who is meeting French President Nicolas Sarkozy later on Tuesday in Paris for talks on the eurozone crisis, said last month she expected German growth to reach a similar level this year to the rate in 2010, when it hit 3.6 percent.

On the eve of the talks both sides talked down the chances of a breakthrough, and the French and Spanish markets dipped when a German spokesman flatly ruled out talk of issuing a joint eurozone bond.

Last week, European stock markets saw their worst losses since 2008 on rumours that France might lose its Triple A credit rating and as the European Central Bank had to intervene to buy Italian and Spanish government bonds.

Sarkozy has been pushing for a more centralised system of controls across the eurozone, better able in Paris’ eyes to protect against future meltdowns.

But Merkel – and German voters – oppose any bid to create what they dub a “transfer union” in which Germany’s powerful export-led economy effectively underwrites its underperforming eurozone partners.

Such a system would make it easier for struggling members like Greece or Portugal to finance their massive public deficits but would also transfer some of the cost of servicing these debts to German taxpayers.

This would be a complete non-starter for Berlin without a quid pro quo of new rules to enforce tougher fiscal discipline throughout the bloc.

On the eve of the talks, a German spokesman said the idea of eurobonds to pool eurozone public debt would not even be on the agenda in Paris.

Merkel and Sarkozy are to meet in Paris in the afternoon, then hold a press conference before sharing a working dinner.

Sarkozy will meet his cabinet on Wednesday and on August 24 he is due to unveil austerity measures designed to bring France’s budget deficit down to less than three percent of gross domestic product, the EU limit, by 2013.