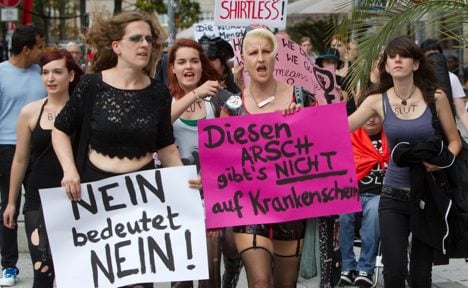 At least 1,500 people, including plenty of men, participated in the Berlin Slutwalk, while several hundred marched in Frankfurt, Munich, Dortmund, Cologne and Hamburg.

Dressed in revealing outfits, or in some cases only gaffer tape, the German protesters carried banners and chanted slogans such as “A dress is not a yes,” “My body to give not yours to take,” “I have nothing to wear that protects me against violence,” as they walked through the city.

The Slutwalk campaign was sparked by Constable Michael Sanguinetti of the Toronto police force, who said at a crime prevention forum in January, “Women should avoid dressing like sluts in order not to be victimized.”

In response, over 3,000 people marched in Toronto in April, since when Slutwalks have been held in cities across the world, including London, Sydney and Mexico City.

The original founders of the movement wrote in a statement that women “are tired of being oppressed by slut-shaming; of being judged by our sexuality and feeling unsafe as a result.”

Sanguinetti later apologized for his remarks.

Co-organizer of the Hamburg walk Anna Rinne explained the reason for the protests. “Even when people walk half-naked through the streets, it is not their fault if they are victims of violence,” she told the DPA news agency.