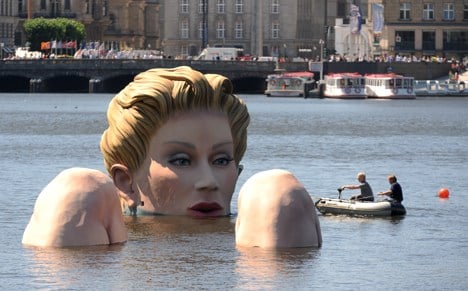 The blonde head and two knees poking out of the water in Hamburg’s Binnenalster have provoked mixed reactions so far.

Some spectators have described it as a “superfluous spectacle,” while others think it carries an environmental message. “Like that blonde, we should one day be able to swim in the Binnenalster again,” commented one spectator.

The final installation was delayed for two days with technical problems that threatened to sink the project, but now the figure is expected to continue her bath for at least another week.

The work is the brainchild of Oliver Voss, an artist and former chairman of an advertising agency. His “Bather,” as the sculpture is entitled, had to jump through a number of bureaucratic hoops before it could be installed, but now he’s proud of the finished product.

“I wanted to give something back to the city that gave me so much,” Voss said. The figure, whose knees rule it out from being technically classified as a mermaid, is made of styrofoam and steel and stabilized with sandbags and buoys.

“The giant nymph is not meant to provoke,” added Voss. “It’s just to encourage you to experience the Binnenalster in a new way.” He also said that it is meant to promote Hamburg as a centre for creative industries.

The department for urban development and environment in Hamburg supported the project, but the director of the local authority Markus Schreiber held reservations until the end. But since the lake is technically out of his jurisdiction, his authority was superseded.