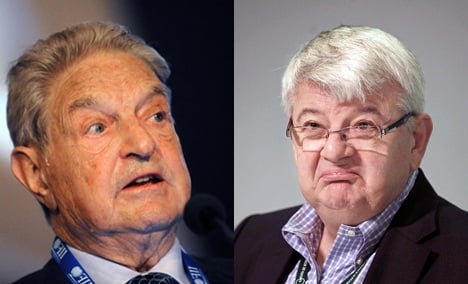 Multiple photos of Fischer accompany the article – including a picture on the front page of Wednesday’s Qingnian Cankao (“Elite Reference”) newspaper, German daily Die Welt reported on Thursday. The mix-up occurred even though both Soros and Fischer are fairly well-known in China.

The Chinese article takes issue with Soros’ recent announcement that he’s quitting as a hedge and wealth fund manager. It charges that the “financial crocodile” wants the public to think he’s moving on, but he’s actually preparing to expand his business in China. The page with those charges carries a photo of a brooding Fischer, according to Die Welt.

By Thursday, editors at the Chinese newspaper appeared to have caught their error. There was no trace of a story about Soros on the paper’s website and a copy of its front cover showed a Chinese man on a train.

Even top-flight Chinese newspapers are known for embarrassing mix-ups involving the Western media and public figures.

In 2002, the Beijing Evening News lifted a story from the satirical newspaper The Onion about US Congressmen threatening to move to another city if a new Capitol building wasn’t built.

Although editors were at first defensive, they later admitted their error.