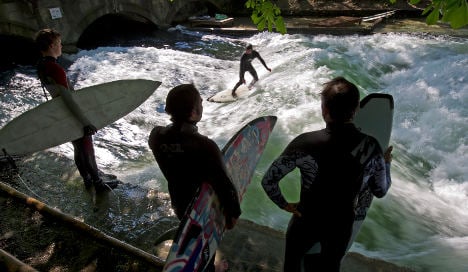 Berlin’s Babylon cinema is on the last leg of its Charlie Chaplin marathon. This week catch a screening of The Gold Rush, The Great Dictator, Modern Times and more of the silver screen icon’s cinematic gems. Go on the weekend when a live orchestra performs Chaplin’s original scores.

Director Guy Ritchie and producer Matthew Vaughn met while taking a film course at Raindance in London. See their first collaboration, Lock, Stock and Two Smoking Barrels at Cassiopeia’s open-air cinema, Monday night. And if the on-screen action gets your reels spinning, sign up for a Raindance course. Aspiring screenwriters, directors, and producers can learn the ropes this fall in Berlin.

Excitement, drama, comedy, and skill combine in this sensational show by the Australian circus group Circa. Seven acrobats dazzle as they flip through the air, swing gracefully from ropes, and step carefully atop each other’s heads. And it’s not just about the jaw-dropping tricks, clever comedic timing puts this exuberant stage show in a class of its own.

Extraordinary silhouettes weave an enchanting story in “Shadowland,” the acclaimed show by the American dance troupe Pilobolus. Witness the coming of age of an imaginative young girl as human figures transform into sensational shapes.

It’s party time in Frankfurt! Head to the Römerberg Friday, when live bands kick off a long weekend of fun and games on the River Main. Raise a pilsner in tribute to that revered waterway, and head back Monday for a fantastic fireworks show.

Andreas Reichel plays piano works by Glinka, Mussorgsky, and Tchaikovsky, while Elena Schneider reads passages by Romantic Russian authors like Alexander Pushkin and Mikhail Lermontov. Escape to 19th century St. Petersburg, if only for an evening.

Take a ride on the Ferris wheel this weekend and get a bird’s eye view of Hamburg. A swirling circle of 250,000 LED lights, the 60-meter high ride is the centerpiece of Hamburg’s biggest summertime fun fair. Fireworks enthusiasts should go on Friday when the sparkly pyrotechnics erupt overhead.

They’ll be waving the Union Jack at the Hamburg Polo Club this weekend and if you’ve got a thing for English accents, bangers and mash, and Paddington Bear, you’ll want to join them. The celebration of all things British promises to be great fun for the whole family. Bring a picnic for Saturday evening’s open-air concert.

Surf’s up in Munich this weekend as Honolulu Events transforms the Old Congress Hall into a surf mecca worthy of the Big Kahuna. Take a spin around the skatepark, salute the sun at a yoga workshop, and look at artwork inspired by surfing. After the showcases and workshops wrap up Saturday night, DJs pump out the jams for a surf style dance party.

Choreographer Jerome Bel’s piece for solo dancer offers insight into the struggles a dancer confronts throughout the course of his career. A biographical work about the life of the French dancer Cedric Andrieux, who worked for the Merce Cunningham Company and the Lyon Opera Ballet, the eponymous piece tells the fascinating story of a modern day dancer.

Get your dose of Brazilian rhythms Thursday night in Munich. Banda Brazil delivers the sweet sounds of their native country with an easy, breezy style. Sip on a caipirinha and succumb to the lyrical sway.