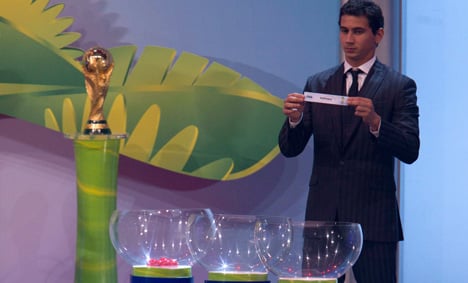 Assistant Germany coach Oliver Bierhoff insisted the three-time champions were ready for the challenge to qualify for the 2014 World Cup after being drawn in Group C with Sweden, Ireland, Austria, Faroe Islands and Kazakhstan.

Speaking to journalists after the draw in Rio, Bierhoff, representing coach Joachim Löw, who stayed behind in Germany, said he thought the Germans would rise to the task as they always have done in the past.

“We are pleased with our group. It is not that easy but we are very happy we didn’t draw (unseeded) France,” said the former striker whose goal won Euro ’96 for Germany at Wembley.

“Now we have to get down to business. The players love playing in Ireland – it’s always a great atmosphere. On paper they are behind Sweden but we see them as being as strong as Sweden. “The pressure on the German national team is high every time. But we can do it. We are the favourites.”

Germany are proud of their record at World Cups.

After not entering the inaugural tournament in 1930, they were then banned in the aftermath of World War II when Brazil hosted the event for the only time to date in 1950.

They have additionally been placed third on four occasions – including both of the last two tournaments. Aside from a 1938 first round exit, runs to the quarter-finals represent their worst showings.

Bierhoff confirmed that the German mentality of knuckling down to the task was a key reason why they have been so consistent.

“You have to be very focused. Teams are very close together. For no team it’s easy to be first in the group. All teams want to go to the World Cup.”

Football Association of Ireland chief John Delaney said he was looking forward to seeing his country take on the Germans.

“Germany have got to be favourites (to win the group) but you wouldn’t concede it. The last time we played them over two legs, it was close,” he told Sky Sports News.