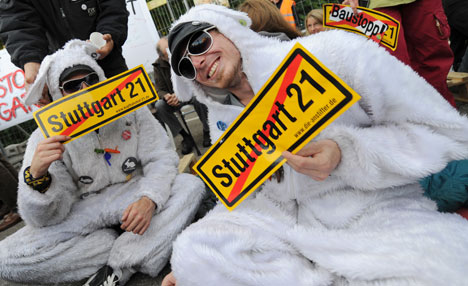 The compromise, put forward by arbitrator Heiner Geißler, calls for combining the existing terminal station with a new, slimmed down version of the low-level, through station.

But on Saturday, Federal Transport Minster Peter Ramsauer of the centre-right Christian Social Union (CSU) said he was not impressed with the compromise plan.

“This is a very old idea that was already thrown out years ago,” he told the Passauer Neue Presse.

The €4 billion rail project, which aims to turn the Baden-Württemberg capital into a major European transport hub, has been the center of large-scale protests after a powerful grassroots movement developed against the plans. Rail operator Deutsche Bahn wants to replace Stuttgart’s existing train station with an underground one that it says would greatly improve links between Paris, Vienna and ultimately Budapest.

Geißler, a former general secretary of the CSU’s sister party, the Christian Democratic Union (CDU), was appointed to mediate between the two sides in October last year after prolonged and sometimes violent protests began at the construction site.

The compromise plan worked out by him and the Swiss transport firm SMA was entitled “Peace in Stuttgart” and would allegedly reduce the costs of the project to €2.5 billion instead of €3 billion.

Under the plan, the underground rail station would have four instead of eight tracks and would allow fast, through trains to pass while regional trains would be directed to the existing above-ground station, where the number of tracks would be reduced to 10 or 12.

“Do you all want to have total war?” Geißler said during an acrimonious meeting on Friday evening. “We can do that or we can try, as reasonable people, to find a reasonable middle road.”

He said that because the project has passed a so-called “stress test,” a probe into the project’s future capacity, that all parties involved were required to fulfill their contractual responsibilities.

On Friday night, Volker Kefer, a member of the management board of Deutsche Bahn, told the meeting that building work on the underground station would go on.