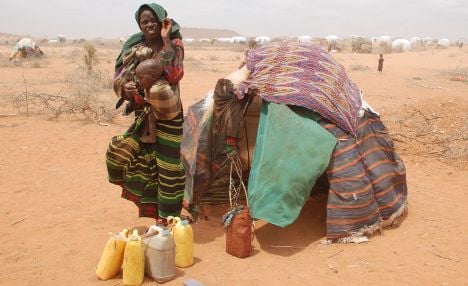 Günter Nooke told the daily Frankfurter Rundschau it was clear that “this catastrophe is also man-made.”

“In the case of Ethiopia there is a suspicion that the large-scale land purchases by foreign companies, or states such as China which want to carry out industrial agriculture there, are very attractive for a small (African) elite,” he said.

“It would be of more use to the broader population if the government focused its efforts on building up its own farming system.”

He said that the Chinese investments were focused on farming for export which he said can lead to “major social conflicts in Africa when small farmers have their land und thus their livelihoods taken away.”

“Not everything the Chinese are doing in Africa is bad,” Nooke said. “Chinese investment has perhaps an advantage: it will show how industrial farming in Africa can be carried out effectively.”

He said that Germany supported a gradual phase-out of European agriculture subsidies so African farmers could have a shot at exporting their produce but admitted that there was still strong resistance.

Somalia is the Horn of Africa country worst affected by a prolonged drought – the region’s worst in 60 years – that has put some 12 million people in danger of starvation and spurred a global fund-raising campaign.

The catastrophe has also hit parts of Ethiopia, Djibouti, Kenya and Uganda.

AID
EXPLAINED: How Germany plans to support families and businesses in the pandemic
Url copied to clipboard!