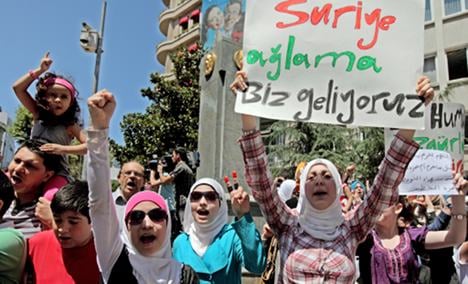 Schäfer added that critics of the regime had also been welcomed at the foreign ministry in Berlin.

During the talks in Damascus with Muallem, Ruge “delivered the clear message on behalf of Foreign Minister Guido Westerwelle that the time for change and an end to violence against demonstrators has come,” Schäfer told reporters. “He emphasised in particular the clear message from the last (EU foreign) ministers’ meeting on July 18 that the entire European Union strongly criticises … the actions of the Syrian government and that this could lead to new European Union sanctions.”

Germany is one of the first Western countries to announce direct contacts with the Syrian opposition, which has held several meetings in Turkey.

Earlier this month, the US and French ambassadors in Syria met with opposition representatives in the city of Hama, the scene of major anti-government demonstrations.

At their July 18 meeting in Brussels, EU foreign ministers pressed Syrian President Bashar al-Assad to implement reforms or stand aside as they threatened more sanctions.

The 27-nation EU has already slapped asset freezes and travel bans on the Damascus regime, including against Assad.

Germany, which holds the rotating presidency of the United Nations Security Council this month, has stepped up diplomatic efforts in the Middle East and North Africa in recent weeks in response to the wave of uprisings.

According to a report last week, Berlin is serving as an intermediary in a bid to convince Yemeni President Ali Abdullah Saleh to stand down amid a popular revolt against his three-decade-long rule.

And following a widely criticised decision to abstain from a Security Council vote in March a Libya mission to protect civilians and enforce a no-fly zone, it has stepped up support for the opposition there as well.

On Sunday it said it was making available to the rebel National Transitional Council (NTC) up to €100 million ($144 million) in loans for civilian and humanitarian purposes.