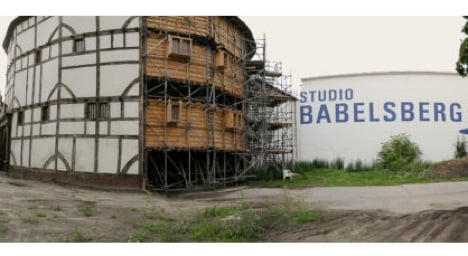 Emmerich had given the theatre-in-the-round to Christian Leonard, the artistic chief of Shakespeare Company Berlin, as a gift after more than 30 of his actors appeared in a film for the director, “Anonymous.”

The production about Shakespeare by the German-born Emmerich (“Independence Day”) and starring Vanessa Redgrave and Rhys Ifans required a Globe Theatre set, which was built at a cost of around €500,000 ($716,000).

But a dejected Leonard told news agency AFP that he had been unable to agree with city authorities on a site to transplant the three-storey venue, a remarkable copy of the arena where Shakespeare staged his plays some 400 years ago. This left him unable to find a sponsor to cover his costs.

“I fell in love with the theatre and if you’re passionately in love, you don’t let the object of your desire go,” the 49-year-old said. “I want to see plays put on in this theatre, not have it land in the trash.”

The set, which seats 700 people, is still at the 99-year-old Babelsberg Studios outside Berlin, where Fritz Lang made the classic “Metropolis.”

But spokesman Eike Wolf said it needed to be dismantled and removed by July 30 to make room for a major production.

The new picture, “Cloud Atlas” starring Tom Hanks, starts filming in September in Babelsberg. Its producers call it the most expensive German film of all time.

Wolf called the Globe Theatre “one of the most ambitious sets we ever built at the studios,” which frequently host major Hollywood productions. He said that it had been sitting empty since filming on “Anonymous” wrapped up over a year ago and that time was running out to get rid of it.

“Usually, such sets end up in design heaven but this one is a little different,” he told AFP.

Leonard has now offered it for a minimum price of €1, but the successful online bidder must agree to cover the costs of dismantling and removing the set, estimated at €50,000.

He reckons it would cost about €365,000 to renovate the set so it would meet the construction requirements for a public theatre. It is listed on eBay as “To be collected by bidder (will not be shipped).” The auction runs until Sunday.

Leonard says he would be heartbroken to see his fantasy crushed, and fears that if he is unable to sell the set by next week he may be sued by Babelsberg, which he said had until now been “very understanding.”

One woman, the daughter of a puppeteer, placed an offer of €1 to buy it as a gift for her father but asked Leonard to pull out of the auction when she learned they would have to cover the high removal costs.

“I don’t want to say I’m desperate because I don’t think that way but my back is against the wall,” he said.

“I have two small children and no savings. My dream, after 12 years, is unfortunately still unfulfilled so I need a lot of patience. Remember – (actor and director) Sam Wanamaker took 30 years to rebuild the Globe (in London) and that was in Shakespeare’s home country. But I don’t want to wait that long.”