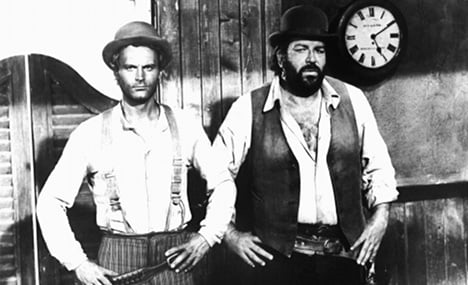 Thousands of Germans have swarmed the website of the 60,000-strong city, voting to name a tunnel currently under construction after Spencer, an Italian actor who starred in dozens of action movies with his on-screen cohort Terence Hill.

Started as an exercise in civic participation, Schwäbisch Gmünd city officials collected public suggestions for the tunnel’s name. After sifting out blatantly offensive options, they then put them all on the internet and invited people to vote.

Before long, a groundswell of support for the Bud Spencer Tunnel had formed, apparently driven by a campaign on the social networking website Facebook.

The “Vote for Bud Spencer Tunnel Schwäbisch Gmünd” Facebook group only seems to be growing in influence. More than 20,000 people there claim to have voted for his name to grace the tunnel.

In addition, 100,000 other Facebook users have received invitations to participate in the group, which is constantly getting new “fans.”

The situation seems to have bemused Schwäbisch Gmünd’s leaders, who will still have the final say on the tunnel’s name since the internet voting is non-binding.

“That’s a funny story. The city council will discuss the results,” said city spokesman Markus Herrmann, while expressing concern that the vote seems to have been hijacked by people from outside Schwäbisch Gmünd. “The vote on the internet is no longer a Gmünder vote.”

The amount of support for each name will be made public on July 27 when the council picks the tunnel’s name. Other options include Unicorn Tunnel since the mythical animal is part of the city’s emblem and simply Gmünder Tunnel.

But some 51 Facebook backers of the Bud Spencer Tunnel have announced they will attend the council meeting to express their opinion.

The 81-year-old Spencer, who was born Carlo Pedersoli, reportedly picked his stage name by combining Spencer Tracey with his favourite beer Budweiser.