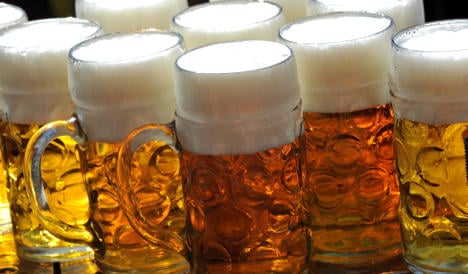 From centuries-old marksmen’s clubs to cliff-side jazz concerts, Munich’s residents have perfected Bavaria’s greatest gift to mankind – the beer garden. Here are some of the best options for summer drinking.

You’ll only find it here: Enjoy a plate of Munich’s best spare ribs while being serenaded by jazz bands from around the world.

The Waldwirtschaft in Großhesselhoehe is one of Munich’s worst kept secrets. Located 20 minutes from the Marienplatz by train, this renowned jazz beer garden received first place in the local Abendzeitung’s annual “Mein schönster Biergarten” reader survey in 2010. Yet even despite this well-deserved acclaim, the WaWi remains an institution where everyone from students to Lederhosen-clad Urbayern is welcome. During the week, it’s a mostly older crowd enjoying cold Radler or Russn over lively conversation and rounds of Schafkopf, a Bavarian card game. The garden’s focal point is a gazebo covered in bushy garland and blue and white ribbons where, amid sounds of rattling beer glasses and hands thumping cards onto wooden tables, jazz musicians from all over the world serenade guests with their old-time dixieland and revival swing styles. An abundance of trees offers a cool reprieve from the hot summer sun and there are beautiful views of the Isar river below. While it’s important to keep in mind Bavarian beer garden etiquette that allows consumption of outside food as long as beverages are purchased on site, plan on ordering some crispy spare ribs doused in the WaWi’s own “spare ribs sauce” (read: tangy barbecue).

You’ll only find it here: Augustiner Edelstoff on draft in traditional wooden kegs. Also, the plump, crispy mackerels are some of the city’s best Steckerlfisch.

Munich’s oldest beer garden, the Augustiner Keller can be found on city maps dating all the way back to 1812. A hot spot for thirsty tourists and Münchener alike, the beer garden’s proprietors strictly serve all of their beer out of wooden barrels, known as “Hirschen.” This ensures that the beer maintains its mild taste, as it avoids the need for extra carbonation (the only force pushing the beer out of the kegs is gravity). Beer connoisseurs can enjoy a litre of Augustiner’s beloved Edelstoff brew – a hoppy export beer with a soft, oaky aftertaste – or a more full-bodied Weißbier, all of which is stored in the underground “ice cellar” located directly beneath the beer garden. The 100 chestnut trees casting a comfortable layer of shade also offer extra insulation for this subterranean storage space. If you happen to find that even a beer garden boasting capacity for 5,000 can fill up quickly, don’t fret – there are almost always extra tables and benches stacked in the back-right corner behind the jungle gym.

Directions: Take the U3 to Obersendling, then the 134 Bus until Flößergasse. Walk along the Steinerstrasse and through the tunnel under the S-Bahn tracks. Münchener Haupt will be on your right.

You’ll only find it here: VIP guests can arrange to have a hand-crafted, wooden target emblazoned with a design of their choosing, like a company logo or a family crest.

Catering almost exclusively to the local Sendling community, Münchener Haupt’s clientele consists mostly of people who live within walking distance or at most a leisurely bike ride away. With an inconspicuous location behind the Obersendling U-Bahn station, an outsider is guaranteed a quiet, genuinely Bavarian experience. Münchener Haupt traces its roots back to the 15th century and the name is merely an abbreviation for “Königlich Privilegierte Hauptschützengesellschaft München” or “Royal Privileged Marksmen Club Munich.” Established in 1406, it was originally located where Munich’s Central Station is today. In addition to the alluring beer garden, there is a shooting range for club members out back.

You’ll only find it here: “Nockherberger.” A hazy, aromatic Kellerbier only available in Paulaner’s hilltop beer garden and adjacent restaurant.

It is no easy feat for a beer garden in the beer capital of the world to run out of its signature brew, especially when 5,000 litres of Weißbier and 15,000 litres of Helles are always on reserve. But this is exactly what happened late last month when beer drinkers at the Paulaner am Nockherberg beer garden were told the unthinkable: the kegs are dry. Luckily for Paulaner am Nockherberg’s thirsty patrons, the beer garden is next door to the brewery and it only took employees 15 minutes to get the beloved brews flowing again. Still, one would like to think that it was the breathtaking bird’s eye views of the Munich-Au district or the delicious, trübes Weißbier on tap (one of Munich’s finest) that led to the unusual blunder. That said, even if all that’s left on tap is Dunkles, it’s easy to make the best of a bad situation.

Directions: Take the U6 to Westpark, walk 10 minutes through the park.

You’ll only find it here: Large groups can order (and tap) their own keg.

Overlooking the vibrant pinks, deep reds and bright yellows of Westpark’s rose garden, this hilltop retreat makes one of the best places to escape the bustling Old City or crowded English Garden even better. Bring a date, grab dinner and catch a late flick in nearby Kino Mond & Sterne, a beloved outdoor cinema. Although cuisine at the Rosengarten is more “international” than most beer gardens down south – with dishes like chicken nuggets and currywurst – you can still satiate your appetite for Bavarian with greasy 1/2 chickens, grilled mackerel and buttery Obatzda – that cheese specialty that goes so well on those huge pretzels.