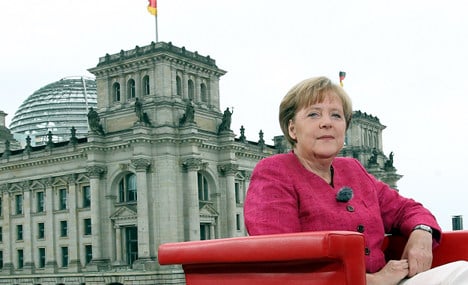 In an interview with public broadcaster ARD on Sunday evening, Merkel repeatedly said that the euro had to be defended at all costs, but rejected criticism that her approach to the crisis had been haphazard and rudderless.

“The euro is not in crisis,” she said, while adding that the currency was “especially” important for an exporting nation like Germany. “We are working to make the euro a stable currency.”

But she acknowledged Greece faced serious problems and reiterated the necessity of an initial bailout of the heavily indebted country. Merkel also stressed the importance of having the private sector help shore up Greece.

“The more we get private investors voluntarily involved now, the less likely we will have to take further steps,” she said.

While calling the situation “very, very difficult,” Merkel said she and other European leaders “are trying everything we can to avoid something even tougher.”

She added that she would attend a summit of eurozone leaders in Brussels on Thursday – to agree to a new Greek rescue package only if there were a prospect of a concrete deal.

Merkel has faced sustained criticism of her handling of the eurozone crisis in recent months, but she garnered support from the head of the European Central Bank on Monday.

ECB President Jean-Claude Trichet told the Financial Times Deutschland that it was unfair to slam Merkel for dithering throughout the eurozone’s sovereign debt crisis.

“I would see a discussion of this kind as being completely misplaced in the current situation,” he said. “There is an absolute need to improve ‘verbal discipline’,” he added, indirectly criticizing European leaders for their attacks on Merkel.