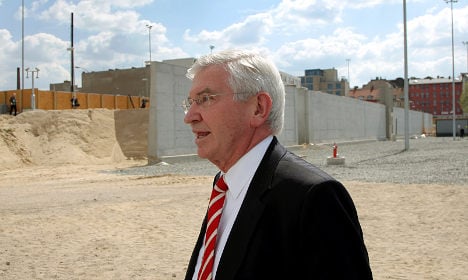 At first the leak of the plans of the multi-million euro new offices earlier this month, was portrayed as little more than embarrassing, with assurances made that no changes in the enormous construction would have to be made as a result. BND President Ernst Uhrlau said the plans only showed a car park, energy supplies and a canteen.

But over the weekend, news magazines Der Spiegel and Focus reported that the drawings showed details of laboratories and offices, as well as precise information on security entrances, emergency exits and smoke and fire protection as well as protection against break-ins.

According to Der Spiegel, a firm involved in the construction project had made hundreds of copies of the plans. Opposition Social Democrats now intend to call Ronald Pofalla, head of the Chancellery (responsible for secret service coordination), and Peter Ramsauer, buildings minister, before a parliamentary committee to explain what happened, according to the Frankfurter Rundschau on Monday.

Uhrlau is losing respect among the government for his handling of the issue, largely seen as ineffective, the paper added.

The attitude of the BND under him seems to run along the lines of, “It’s not so bad, there is no problem,” criticised Wolfgang Bosbach, chairman of the parliamentary interior affairs committee. “We see it differently,” said Bosbach, a member of the ruling Christian Democratic Union.

“Mr Uhrlau now has a real problem,” Bosbach told the Mitteldeutsche Zeitung on Monday. “I am certainly not sure whether the government still has the confidence that they have to have in the head of the BND.”

He even said that the BND under Uhrlau had misled the government.

“When one tries to deceive the chancellery and the public, a line has been overstepped,” said Bosbach.