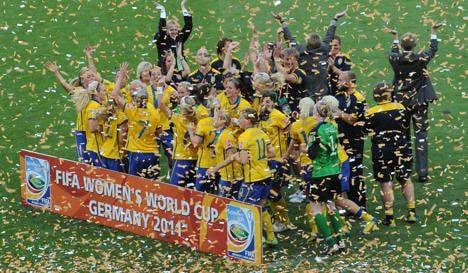 Sweden striker Lotta Schelin put her side ahead in the first half only for French replacement Elodie Thomis to equalise on 56 minutes before Swedish striker Josefine Oqvist was sent off on 68 minutes.

But in the dramatic closing stages, substitute midfielder Marie Hammarstrom won the game – and the bronze medal – for Sweden with a superb strike in the 82nd minute.

Both teams had already secured the two available European places at the 2012 Olympic Games in London by reaching the semi-finals.

Sweden’s 3-1 defeat to Japan in Frankfurt on Wednesday and France’s 3-1 loss to the USA in Moenchengladbach the same day brought the teams to the play-off.

The Swedes took the lead when a pass by defender Sara Larsson from inside her own half found Schelin and the Lyon striker chipped her shot past French goalkeeper Berangere Sapowicz on 29 minutes.

To add injury to insult, Sapowicz was stretchered off in obvious pain as the replay showed her jumping to block Schelin, only to land on her right ankle, which buckled underneath her.

The French got back on level terms when left winger Gaetane Thiney won a tussle for the ball on the edge of the penalty area and strung a pass through the defence for substitute Elodie Thomis to roll her shot past Lindahl on 56 minutes.

Sweden were reduced to 10 players when Oqvist was shown a red card for lashing out, but the Scandinavians dug deep for the winning goal.

From a corner, the ball was headed away to Hammarstrom – who had only come

off the bench an hour into the game – and the 29-year-old produced a stunning goal.

Having controlled the ball with her chest, she unleashed a fierce drive from the edge of the area which gave French substitute goalkeeper Celine Deville no chance.