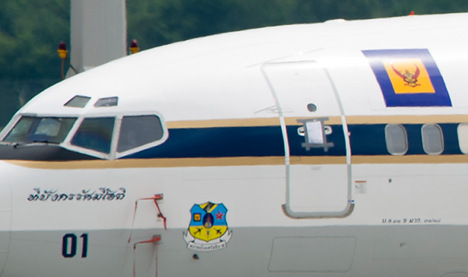 Foreign Minister Kasit Piromya is on his way to Germany to protest the matter personally, according to the Bangkok Post newspaper.

Should the plane not be released it could have serious detrimental effects on German-Thai relations, he told the newspaper, calling the move a “huge mistake.”

The Boeing 737 – which is said to be owned by the Thai Air Force but controlled by a crown prince – was seized at Munich’s airport this week in a long-running €30 ($57) million over money allegedly owed to the now insolvent Walter Bau construction group.

The dispute stretches back more than 20 years, to when the German construction firm Dywidag helped build a 26-kilometre road between Bangkok and the airport for which payment was allegedly never received. Dywidag merged with Walter Bau in 2001.

“We in the insolvency of Walter Bau AG have been trying for many years to enforce a legitimate demand of more than €30 million and this drastic measure is virtually the last resort,” said Werner Schneider, the insolvency administrator for Walter Bau, in a statement.

The Thai government has said that the dispute is being blown out of proportion and that the German action was illegal because the aircraft belongs to the crown prince himself and not the state.

Piromya said he was already protesting the matter with Germany’s Foreign Office and demanded the German courts release the plane immediately.