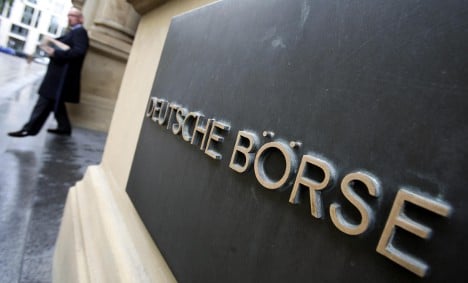 The result surpassed a minimum level of 75 percent needed to approve the deal, Deutsche Börse said in a statement.

A detailed figure is to be published on Friday but the offer is also to be extended by two weeks to allow hold-outs to exchange their Deutsche Börse shares for ones in a new Dutch-based holding company.

Shareholder approval was one of the the last major obstacles to the merger plan as NYSE Euronext shareholders had approved the deal on Thursday.

It still requires the approval of competition authorities, however, since the new group covers Amsterdam, Brussels, Frankfurt, New York, Lisbon and Paris and will have a quasi-monopoly on areas such as European derivatives trading.

The European Commission is studying the deal and is to give its opinion by August 4, while the partners aim to finalise the merger by the end of the year.

The new company is valued at $25 billion (€17.6 billion) and the deal has sparked controversy in the United States because it would hand over the 221-year-old New York Stock Exchange to foreign owners.

NYSE Euronext chief executive Duncan Niederaurer admitted last week that NYSE Euronext and Deutsche Börse would need to make some concessions to regulators but insisted that the merged company would not spin off any of its European derivatives exchanges.

“It would be unprecedented for us to divest one of the derivative exchanges. That’s a huge part of the value creation opportunity,” Niederaurer said.

Under the terms of their February 15 merger proposal, Deutsche Börse shareholders will own 60 percent of the new combined, Netherlands-incorporated firm, and the German company will dominate the new board.

If the merger is finalised, the new company will be headquartered in both Frankfurt and New York.

“This is the first step in creating a total, complete, global exchange that offers transparency, connectivity and a suite of product offerings that will define and shape the future of investing,” said Kenneth Polcari, a floor trader at the New York Stock Exchange.

As for the name of the new company, it was not expected to be revealed “for a few months,” a source close to the matter said.