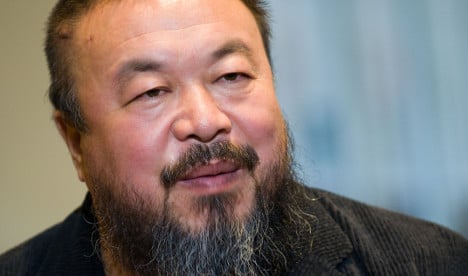 “When the artist can take up his professorship is unclear,” the UdK said in a statement. “After almost three months in prison Ai Weiwei was released on bail from prison on June 22. It remains to be seen when he will be allowed to leave China.”

Police have accused Ai of tax evasion and the government said he was freed because of his “good attitude” in admitting to the charges against him, his willingness to repay taxes he owes and on medical grounds. He has diabetes.

Rights groups have however said the outspoken 54-year-old, who is known for his fierce criticism of the ruling Communist Party, was detained as part of a wider clampdown on activists launched in February.

“I hope to be able to contribute something important in the future,” Ai told news agency AFP by text message after the announcement, adding he was “not sure” when he would be able to come to Berlin.

The UdK is one of Germany’s few art colleges with full university status, offering more than 40 courses in arts and related academic studies at its four colleges of Fine Art, Design, Music and Performing Arts.