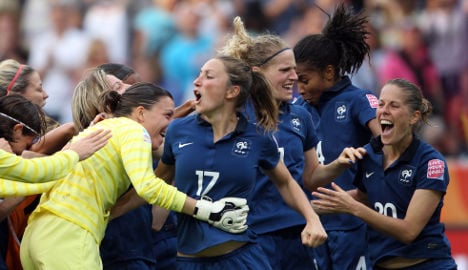 With the big dangers Germany and Brazil already eliminated, the United States are the only remaining pre-tournament favourites in the running.

Despite struggling to reach the Germany 2011 competition, the Americans have never failed to qualify for the global tournament and were twice champions – winning the inaugural event in 1991 and again in 1999.

As well as being ranked number one in the world by FIFA, the United States are also the reigning and three-time Olympic champions.

France, by contrast, are a team on the rise after failing to get past the group stages in their only previous appearance on the world stage in 2003.

“They are the number one nation in the FIFA rankings. They have 2.5 million club players. It’s sure that it’s easier to find 21 than when you have 55,000 club players to chose from,” said Bini.

“But you’re not under-19 European champions, European quarter-finalists and World Cup semi-finalists without being competent in some way.”

Both sides have had very similar paths to the semi-finals, finishing second in their respective groups after losing one of their games.

France fell 4-2 to Germany in Group A, while the United States were shocked 2-1 to Sweden in Group C.

They are also both coming from bruising quarter-finals needing dramatic penalty shoot outs before advancing after a gruelling 120 minutes of play.

The United States got past Brazil 5-3 on penalties after the match ended 2-2 after extra-time on Sunday, a day after France achieved a 4-3 penalty win over England after their tie had ended 1-1.

“We have an extra day to prepare for the next match at least,” he said.

Defender Laura Georges, one of the French team’s contingent of ten players from Champions League winning side Lyon, believes France have a fighting chance in the most important game of their careers.

“They (the US) are solid, tactically very well organised and athletically very strong. We’re going to really test ourselves on that level. They have a real athletics culture.

“But eveything is to play for as it is in every match,” said Georges.

USA coach Pia Sundhage believes that her side’s strong past record has proved an enormous help when they are in a tight corner.

“One of the advantages of the United States team is that we have been winning gold, silver and bronze medals since 1991,” said the Swedish-born coach. “This is something when we’re pushed into a corner we can look back at but be humble about as well.”

Wednesday’s second semi-final sees Sweden take on Japan, with the final taking place in Frankfurt on July 17, a day after the third-place playoff.