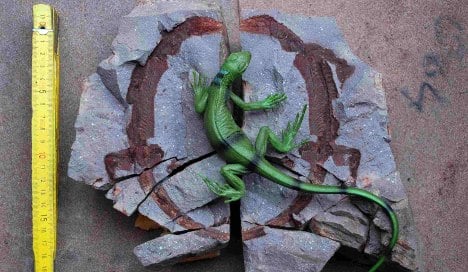 The researchers in Chemnitz have found five well-preserved fossil skeletons of a reptile species that lived more than 50 million years before the reign of the dinosaurs. The species resembled a modern iguana and was 30 to 40 centimetres from head to tail.

The species is unusual because it lived predominantly in trees rather than on the ground. Because of the fossils’ excellent preservation, scientists could learn a lot about reptile life in the Permian period between 300 million and 250 million years ago, said Jörg Schneider, professor of palaeontology at Freiberg University, who is involved in the excavation in Chemnitz.

“Most other reptiles lived on the ground,” he told The Local. “For the first time we really know this animal was specialized for living in trees … They have unusually long and slim fingers and very long tails … It is a completely new form that is unknown.”

The Permian period was marked by the diversification of land vertebrates and appearance of modern trees such as conifers. All of the modern continents were clumped together in the single supercontinent, Pangea.

Mammal ancestors such as the famous fan-backed Dimetrodon flourished but the period ended with a massive extinction 250 million years ago that wiped out about 70 percent of land vertebrates, probably through a combination of climate change, volcanic activity and asteroid strikes.

The petrified forest on the outskirts Chemnitz is remarkably intact because it was buried in fine ash from a nearby volcano eruption. Normally such fossil remains of animals have been washed some distance from where they lived and died and then preserved in lakes and sediments, Schneider said.

The Chemnitz forest, by contrast, has been preserved virtually as it stood 290 million years ago, complete with trees, insects, spiders and snails as well as larger vertebrate animals. The reptiles were found at the foot of the trees from which they fell.

“You could call it the Pompeii of Saxony,” Schneider said. “They are exceptionally well-preserved skeletons because of this very fine ash. We could see every bone, we could see the outline of the skin and beautifully preserved scales. It looks like they just died days ago.”

This gives the researchers insight into the whole ecosystem and the food chain.

“It will contribute a lot to our understanding. Especially to palaeobiology,” Schneider said, referring to the study of fossils to determine how ancient species lived and evolved.

As well as excavating the site, the research team has been using computer tomography to create three-dimensional reconstructions of buried parts of the 150-square-metre forest.

Although the petrified forest was discovered nearly 300 years ago, the present excavation only began in 2008.