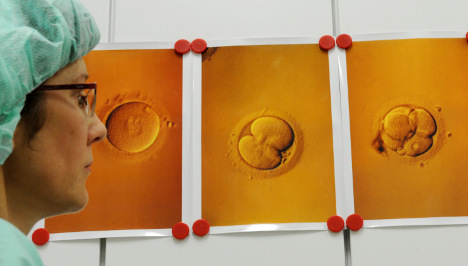 Within limits, couples will be allowed to have embryos meant for IVF implantation tested. Only healthy embryos would be implanted, while embryos carrying genes that cause disease or disability would be discarded.

After a lengthy and at times emotional debate, the Bundestag voted in favour of the law, which will set strict limits on the technique. Only couples who themselves carry genes that cause or predispose to serious illnesses will be allowed to use the practice and each case will be vetted by an ethics panel to prevent a first step towards so-called “designer babies.”

Some 326 MPs across all parties voted in favour of the move and 260 against it, with eight abstentions. All parties gave their MPs a free conscience vote on the morally contentious issue.

They were given the option of voting for a total ban, a ban with exceptions, or a limited legalisation.

In so-called preimplantation diagnostics (PID), a test is carried out at a very early stage on an IVF embryo before it is implanted in the woman’s womb. Only healthy embryos are then implanted, while those carrying genes known to cause disease or disability are discarded. The practice is controversial among many social conservatives and church followers because it means it involves actively selecting which embryo can become a fully-fledged person and which cannot.

The question of conscience should be left up to parents, many of whom were afflicted by the frustrated desire for children, von der Leyen.

Hintze said the technique helped prevent medically necessary abortions and still births. To ban such a technique in a country that permits abortion made no sense, he said.

It is already legal – and common practice – to carry out diagnostic tests on an embryo in a woman’s womb.

Flach spoke out against opponents’ claims that the law would open a floodgate or take the country down a slippery slope towards so-called “designer babies” in which parents pick and choose traits down to gender and eye colour. The law would only be used in a few hundred cases, each of which would be carefully assessed by an ethics commission, she said.

Wolfgang Zöller of the Bavarian Christian Social Union said the “right to life must not be brought into question” and the state’s duty to protect people with disabilities must not be eroded.

“Today is about the ethics of life,” he said.

When a man’s sperm fused with a woman’s egg, the “life process is set in motion,” he said.

The debate over PID was sparked by a federal court decision last year in which a doctor was acquitted of charges arising from his use of PID on the embryos of three couples using IVF. The doctor had orchestrated the charges against himself in order to have the issue tested by a court.