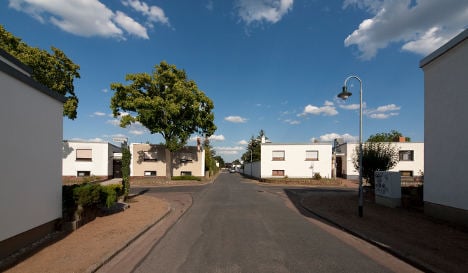 Aficionados of modern architecture visiting Berlin often make a pilgrimage out to Dessau, a small city around 120 kilometres southwest of the German capital. They go to visit the impressive Bauhaus school and nearby masters’ houses, designed and built by the iconic art school’s director Walter Gropius in 1926 and now a UNESCO World Heritage site.

However, the city is also home to a less well-known architectural landmark, the Dessau-Törten estate. Also designed and built by Gropius, the project was an early example of his architectural vision, to provide social housing using innovative cheaper building methods.

Now a new permanent exhibition and information centre is about to open, which will allow visitors to explore the history and development of the pioneering estate.

When Gropius, his students and his band of artistic educators, including Wassily Kandinsky, Paul Klee and László Moholy-Nagy, were forced out of Weimar in 1925 by a new right-wing government, they looked desperately for a new location for the Bauhaus.

The small city of Dessau may not have been an immediately obvious choice. However, the local government, seeing a chance to give the city a cultural boon and also address a desperate housing shortage, wooed Gropius by offering him the opportunity to build homes for low-income families using new building technologies.

A total of 314 small terraced houses were constructed in several phases between 1926 and 1928, in what was an experimental project. Photographs from the time show rows and rows of almost identical houses, all with flat roofs, white walls, and long factory-style windows. The estate was an early example of rationalization and standardization.

“These were the first precursors to houses built using industrialized construction methods,” said artist Ursula Achternkamp, the curator of the new exhibition.

The houses, which were all owned by the residents from the outset, were very small and often housed many generations of the same family. The first ones had an area of 75 square metres (807 square feet), while later houses were just 57 square metres. However, the use of split levels and light made them seem larger, and each house had a balcony and a long garden.

Visitors to the current incarnation of Dessau-Törten may well be disappointed not to find rows of identical modernist cubic houses. Instead the estate has evolved into a hodgepodge of different facades, windows and doors, with a high preponderance of net curtains, garden gnomes and home improvements that might make Gropius turn in his grave.

“The original state of the housing is barely visible today,” Achternkamp explained. “That is why we have so many films from the past, so that people can see how it looked and how life was lived here.”

The exhibition includes interviews with former residents, audio material, photos, plans and models. And a large part of the exhibition is dedicated to showing how the estate’s first residents reacted to their new homes.

“They were happy to move here, having lived previously in small, dark apartments,” Monika Markgraf, head of architectural research at the Bauhaus Foundation Dessau, told The Local.

To own a light-filled house with a proper kitchen and a garden was a big improvement on the overcrowded tenement-like buildings they were leaving behind. “This was freedom, almost like a palace,” she said.

The Bauhaus Foundation is also organizing tours of one of the only houses in the estate to have been preserved in close to its original state. It belonged to an elderly lady who had been one of the first people to move in during the 1920s.

She changed remarkably little during her many years in the house. Countless original features, including the kitchen with its stove and built-in tiled washtub, remain. It is also one of the only houses to have kept its stall, attached to the back of the house, which allowed the owner keep small animals such as hens and rabbits.

“She used it exactly as Gropius had planned,” said Markgraf. “One can really get a sense in this house of how people lived back then.”

The new Information Centre and permanent exhibition open on July 8.