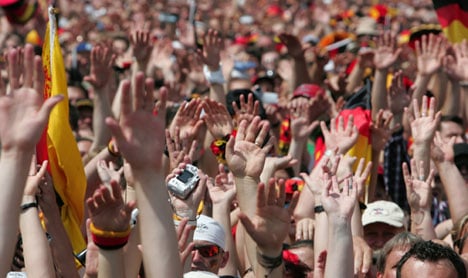 Germany’s 1-0 victory in Frankfurt on Thursday was watched by an average television audience of 16.39 million people, 51.7 percent of the German market, which rose to 19.13 million, 64 percent, at its peak.

The average figure is a new record for a women’s football match here as it beats the previous best of 15.37 million viewers who tuned into Sunday’s opening game in Berlin when Germany defeated Canada 2-1 in Group A.

The figures compare favourably with the average figure of 21.9m who tuned in to watch Germany’s games at the men’s 2006 World Cup, which was also held here.

“It’s unbelievable that the viewing figures have been improved again,” Theo Zwanziger, the president of the German Football Federation (DFB), told SID, an AFP subsidiary. “The numbers show how much interest there is in women’s football.”

And former player Steffi Jones, the head of the organising committee, was also delighted.

“This is the kind of platform we want women’s football to have,” she said. “This is an opportunity to promote the sport and the media is making it possible.”

While Germans tuned in by the millions as midfielder Simone Laudehr’s second-half strike put the hosts in the quarter-finals, the interest was not so strong at the public viewing sites around the country.

A quiet night was reported at fan miles in other host cities in Berlin, Bochum, Möchengladbach and Leverkusen.

But at the fan mile in Frankfurt am Main – a huge success during the 2006 men’s World Cup – some 10,000 ignored the damp weather to cheer on their team.

However the women’s World Cup has not gone down so well with Bayern Munich president Uli Hoeness who says there is little interest in the women’s domestic German league.

“The current marketing campaign is good, the women are playing well and the national team is incredibly popular, but in the (women’s) Bundesliga, there is still only 2,000 spectators per game,” he said.

France and Germany have qualified for the last eight and play each other in Mönchengladbach on Tuesday to decide who will win Group A.