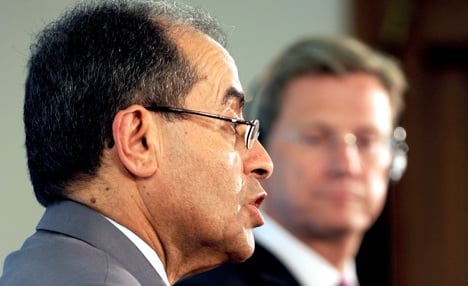 “Help for the Libyan people can come in many ways,” he told reporters in Berlin through an interpreter when asked about Germany opting out of the NATO campaign of air strikes in Libya.

“Protecting the Libyan people from bombardment is not very different from economic assistance and political pressure (against Libyan dictator Muammar Qaddafi).”

Germany in March abstained on a vote at the UN Security Council authorising a Libya mission to protect civilians and enforce a no-fly zone. It was the only European Union or NATO member to do so and provoked criticism from key allies.

Westerwelle recognised Jibril’s National Transitional Council (NTC) as the “legitimate representative” of the Libyan people during a visit this month to Benghazi, the eastern seat of the rebellion.

“We are standing by the democratic forces in Libya,” he told the news conference in Berlin.

Jabril, the top foreign affairs official in the NTC, thanked Germany for concrete assistance offers, including prosthetic limbs for those wounded in combat, psychological counselling for the traumatised as well as support for the around 700 Libyan students in Germany.

Westerwelle reiterated that Berlin was working to hand over assets in German bank accounts belonging to Qaddafi’s regime – estimated at €7.35 billion – to the NTC.

Asked about the French military parachuting light arms to the rebels – a move Russia said could mark a “brazen violation” of a Security Council resolution – Jabril declined to comment.

Westerwelle said he believed any French arms drop had occurred in a “very specific context” but refused to take a stance because Germany is not participating in the NATO air war.