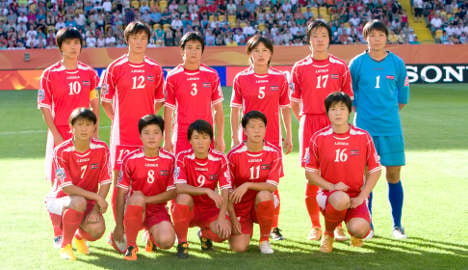 “Frankly speaking, when we were having training and test matches before we left for this tournament, five of the players were hit by lightning and were in hospital,” said coach Kim Kwang Min, through an interpreter in the post-game press conference.

“We had an accident in Pyongyang before we left for this tournament. Some of the players were left behind. Some were in hospital and came later. Until now they were not fully treated for the match.”

In the most unusual day so far of the tournament, officials also announced Colombia goalkeeper Yineth Varon was kicked out of the competition after being suspended by FIFA’s disciplinary committee for failing a doping test.

The 29-year-old missed Colombia’s opening Group C game, which they lost 1-0 to Sweden in Leverkusen on Tuesday, after failing an out-of-competition test here last Saturday.

Germany will play its second match on Thursday against Nigeria, having beaten Canada on Sunday night to take the lead in Group A.

North Korea’s Kim said the lightning incident occurred on June 8. Kim added that the players most affected were the goalkeeper, four defenders and some midfield players – without naming them.

The coach said doctors had originally decided that they were not in a fit state to play but that they played anyway.

Kim also praised his players’ performance under these circumstances.

“The fact that they played in this match is abnormal. It is the result of their very powerful and strong will.”

The news hit FIFA media officials like a lightning bolt as well.

“It was news to us all,” said FIFA media officer Julie Brown at the U.S. press conference when journalists asked for the Americans’ opinions of the North Korean revelation.