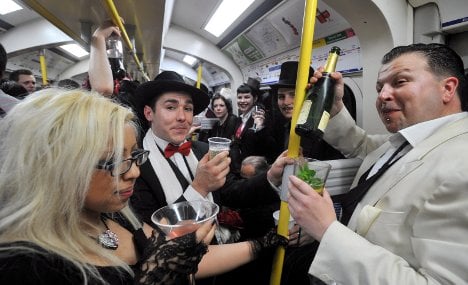 They fear that the September 30 event may be similar to when revellers caused mayhem on London’s public transport system on May 31, 2008 before drinking on tubes and buses in the British capital became illegal.

According the Bild daily, more than 19,000 people in the lively port city have already indicated on Facebook they they planned to attend, although a link on the social networking website was no longer visible on Thursday.

A spokesman for the city’s transport operator, Hamburger Hochbahn, said the company was currently “in talks” with the relevant authorities and was following the situation closely.

A number of “Facebook parties,” where a get-together announced on the website is gatecrashed by large numbers of unwanted guests, have alarmed police and hit the headlines in Germany in recent weeks.

In early June some 1,500 unwanted guests tried to attend a girl’s 16th birthday party in Hamburg that she had announced on Facebook. The teenager forgot to mark the invitation private and even included her parents’ address.

Last Friday the western city of Wuppertal saw clashes between police and youths setting off fireworks and throwing beer bottles after 800 people turned up at a party called by an anonymous Facebook user.

Police used pepper spray and took 41 people into custody, while 16 others were injured. Including a major clean-up the next day, the party cost taxpayers around €120,000 ($170,000), reports said.

Authorities in Wuppertal have attempted to ban another party organised by a 16-year-old due to take place on July 1 that 1,600 people have said on Facebook they planned to come to.