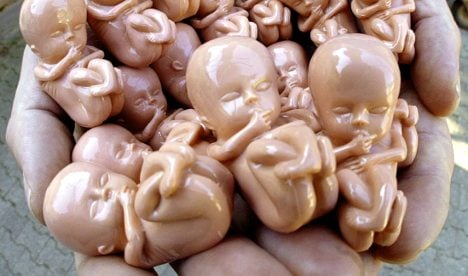 People from the association ‘Life Centre – Helpers for God’s Precious Children in Germany,’ have been approaching women entering the Pro Familia advice centre, showing them photos of aborted foetuses, calling out, “Please mummy, let your child live,” and praying with rosaries hung with model foetuses.

These ‘pavement advisors’ were upsetting the visitors to the Freiburg Pro Familia advice centre so much that manager there, Friedrich Traub made an official complaint to the city authorities.

He told the Badische Zeitung newspaper that only the smallest part of his office’s work was with pregnant women trying to decide whether to keep a baby or not.

In 2009, he told the paper, the organisation in Freiburg and nearby Lörrach had supported 2,000 women with their pregnancies, offered 3,000 people general advice as well as informing thousands of young people about sex and contraception at various events. There were only 900 offers of help to women looking for help with an unexpected or unwanted pregnancy.

The ‘pavement advisors’ increased their activity early this year, approaching women heading to or from the Pro Familia office. “They are trying to exert emotional pressure,” said Traub. One woman was even offered €200 a month in maintenance to keep her baby while another woman was approached via her family.

Traub approached the city authorities for a ban of the campaigners from the street on which his office is located. This they duly did, imposing a €250 fine on anyone who approached unbidden to talk about a ‘pregnancy conflict situation’ or to show them brochures, pictures or objects on that theme.

An appeal against this decision was rejected on Thursday, with the Administrative Court of Baden-Württemberg upholding the ban.

“In the early phase of pregnancy, most women are in a particular psychological state in which in certain cases difficult conflict situations can emerge,” the court said in a statement.

“This pregnancy conflict is experienced by the woman as the most highly personal conflict. She has a right therefore, to be left in peace by strangers who might speak to her on the street.”

The court said it saw a need for state intervention as an unknown number of women were being affected, and that although they would have the option to take legal steps themselves, this would hardly prevent the distress caused.

Also, the court said, women in such a situation should not be expected to take individual legal action as such a move would remove their right to anonymity.