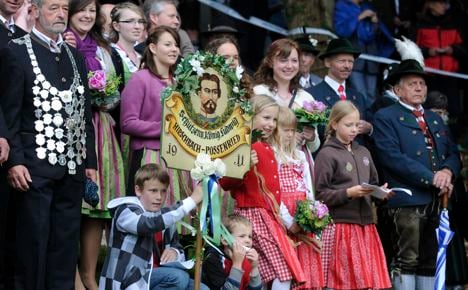 The open-air memorial service was held near the cross that marks where Ludwig’s body was found.

In his sermon, the priest Johannes Eckert paid tribute to the monarch’s life. “He lived in a tension between idealism and reality,” he said, before adding that Ludwig constantly yearned to find beauty in everything.

But not all Bavarians are so reverential to their erstwhile king. A satirical “anti-monarchist swim” was also due to be held in the lake on Monday.

On top of that, the secret society known as the Guglmänner announced their plans to hold a ceremony. The Guglmänner see themselves as protectors of the Bavarian monarchy and are largely responsible for the conspiracy theories surrounding Ludwig’s death.

Ludwig II was found dead in shallow waters of the lake, along with a psychiatrist, on June 13, 1886. He had been declared unfit to rule a few days earlier by his government, apparently suffering from mental incapacity, thought to be clinical insanity – though this modern diagnosis has been disputed.

The official report returned a verdict of probable suicide, but conspiracy theorists believe he was shot.

Occasionally referred to as the Swan King, Ludwig is best known for his extravagance and fairytale obsessions, and was responsible for the construction of the spectacular Neuschwanstein palace, which remains one of Bavaria’s most popular tourist attractions.

He was also a devoted patron of the composer Richard Wagner.