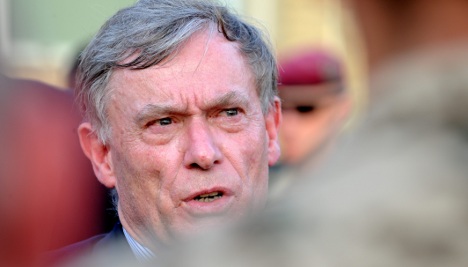 In an interview with weekly newspaper Die Zeit due to be published Thursday, Köhler said political mischief-makers had deliberately misconstrued his remarks.

“I resigned to avert damage to the office” of the presidency, he said, according to a preview report. “The attacks on me in connection to my statements about Germany’s security policy interests were outrageous and completely unjustified.

“It was talk of advocacy for economic warfare and a possible breach of the constitution. Can one accuse a president of anything worse, in view of German 20th-century history?

“My statements in the run-up to the discussion about the extension of the Afghanistan mandate for the Bundeswehr were deliberately misunderstood and exploited for partisan – including internal party political – purposes.

“For me it was about respect and truth in our country’s political culture.”

Köhler, a former head of the International Monetary Fund, suddenly resigned in May 2010 over remarks he had made while visiting Afghanistan that sparked a fierce debate.

“For example, free trade routes, for example to prevent instability in a whole region, which certainly have a negative impact on our opportunities via trade, jobs and income. All of that ought to be discussed and I believe that we are not doing too badly.”

In interview with Die Zeit, he insisted he had never pushed to become president.

“I took on the duty of the office of president. The request was flattering, but 80 percent was fulfilling the duty. I thought I could also help, with my professional experience. But of course, I knew and accepted the institutions and political power structure of our constitution.”

Köhler said that for the past year, he had led “a normal person’s life again.”

“I’m at peace with myself and I enjoy some things that I didn’t before. I’m right now structuring my plans for the coming period. In this respect, everything is under control.”

Köhler is now an honorary professor at Tübingen University. In his spare time, he will write his “life story,” he said.