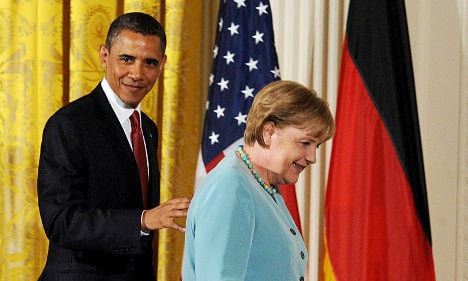 President Obama’s reception of Chancellor Merkel was conspicuous for its pageantry and fanfare, especially in view of the mutual irritation the US and Germany have shown for one another lately.

But as foreign affairs analysts point out, the United States is facing a rising China, a rapidly changing Middle East and a eurozone debt crisis that it hopes won’t further contaminate its own fragile economic recovery.

It needs a strong partner in Europe and Germany is the obvious choice, pointed out Stephen Szabo, executive director of the Washington-based Transatlantic Academy, who was visiting Berlin this week.

“We’d love to see (EU Foreign Minister) Lady Ashton be a real leader of foreign policy but that’s not going to happen,” Szabo said. “Who do you have left? The Brits are the most reliable ally and most important militarily … but they are still kind of marginal and they don’t have as much influence in Europe. The French? I don’t think so. Who does that leave?”

The US believes it’s time Germany stepped up and started acting like a regional and even a global leader – that was the subtext widely read by the German press as Merkel received the Presidential Medal of Freedom and wrapped up her two-day visit to Washington.

The centrist Berlin daily Der Tagesspiegel noted that praise always has a purpose and in this case, Obama’s praise of Merkel meant to raise expectations of Germany.

“Those who receive praise will soon face the expectation that they act accordingly,” it wrote.

It noted that Obama had urged Germany not to hide behind its history – a reference to the nation’s military reluctance and its hesitation to take charge of Europe – and the grasp the mantle of global leadership.

“The world today does not fear a strong Germany. It is, rather, disappointed when Germany is too reserved.”

Naturally Obama wants something in return for his praise, but that is nothing to be concerned about. according to the paper. “Obama trusts the Germans. That is no reason to be alarmed.”

Noting that Merkel is the “undisputed number one” in Europe, Der Tagesspiegel urged her to start acting like it.

The conservative Frankfurter Allgemeine Zeitung wrote that although the US-German relationship had changed since the Cold War, the two countries still had a lot in common and this should be the basis for new co-operation.

“If protocol is the measure of the quality of the relationship, then one clearly doesn’t need to worry about the German-American relationship. It couldn’t be better,” it wrote.

“The reunited Germany remains for the United States the most important, if sometimes unwieldy and self-righteousness-prone, partner in Europe. If it were up to the Americans, Germany’s leadership role in Europe and beyond couldn’t be great enough.”

Germany’s Switzerland-like reluctance on the Libyan intervention clearly annoyed the United States. Germany is no longer the old security client of the Americans it used to be. But that means the partnership must establish new ground: “A co-operation based on mutual interest, for example in Afghanistan, the Middle East, the response to the rise of new superpowers.”

“That President Obama courted the Chancellor like this in the White House was therefore an investment in the future,” it concluded. “Mrs Merkel should be aware of this. One can quickly lose one’s standing.”

Business daily the Financial Times Deutschland noted that the present relationship was not nearly as bad as some critics made out. It was nothing, for example, like the broken relationship between George W. Bush and Gerhard Schröder after the invasion of Iraq.

Merkel and Obama don’t have a warm relationship, they have a working relationship – a fact that the gushing reception of Merkel in Washington could not hide.

“Obama flattered her, because both sides are important to one another, above all economically,” it wrote.

The right-wing Berliner Morgenpost wrote that Obama was trying to reset the relationship after the tensions of late and this would only be good for both countries.

“The Angie-fest must truly be understood as a new start being driven by Obama,” the paper wrote. “In the face of global shifts in power, the president doesn’t want to let a partnership proven over decades simply run down.

“In sensitive situations, a reliable line of communication between Washington and Berlin is indispensable.

“Even after Obama’s elegant appraisal of the German chancellor, it remains doubtful whether the old axis is still enough to move the world. But divided, Germany and the US will always be weaker.”

The centre-left Süddeutsche Zeitung urged the chancellor to accept the US challenge to become more engaged in foreign affairs, beyond simply looking after its own interests in issues like the euro.

“You wouldn’t be far wrong if you get the subtle impression that behind the VIP treatment of the German chancellor, Washington actually expects more from Berlin: more foreign policy and security engagement; a greater German presence at international hotspots; more engagement in North Africa; more in fact in the Middle East generally; more in Europe.

“That may be the message for Merkel. The previous level of engagement will not do.”