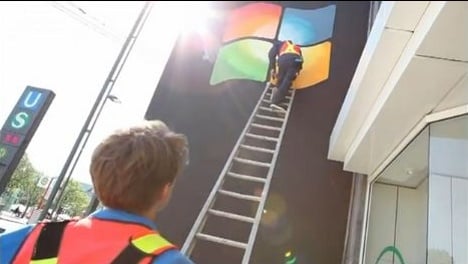 The prank happened in broad daylight on Friday and was posted on video portal Youtube by the group calling itself the “WAVcollective.”

It appears to show two men in construction clothes using a ladder to paste the logo to the side of the building in front of apparently unaware passersby before they saunter away.

It’s not clear if they had a personal motive for dissing Apple or if it was just a techie joke. But the prank has gained notoriety on the web for its brazenness.

Apple Germany spokesman Georg Albrecht told The Local that he had no comment on the incident, but it will certainly help fan the flames of the eternal Mac-PC wars.

Apple said the store near the Jungfernstieg metro station is set to open this summer or autumn. It will be the second one in the Hamburg area.

See the prank below: