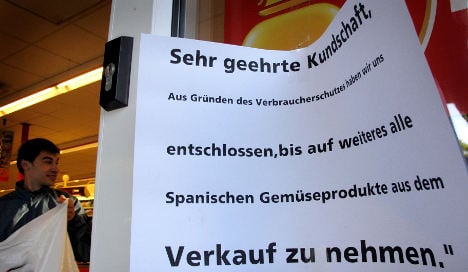 German authorities admitted on Tuesday that tests on two suspect Spanish cucumbers showed they did not carry the enterohamorrhagic E. coli (EHEC) bacteria strain that has killed 15 people in Germany and one in Sweden.

Spain’s vegetable and fruit exporters estimate damages of more than €200 million ($290 million) a week as importers across Europe stop buying Spanish produce because of the scare.

Madrid has demanded European Union compensation for Spain and other producer countries hit by the crisis.

“The bacteria is not in Spain,” Rubalcaba said. “Once the truth is re-established, what we need to do is repair the damages, which are not small: we have lost a lot of money and a lot of our image,” the minister said.

“There were E. coli pathogens found on Spanish cucumbers and therefore a quick warning had to be given in compliance with European regulations,” she said, adding that officials in Hamburg had “acted really well.”

German authorities say they are still searching for the source of the outbreak.

European Union officials did not immediately weigh in on the Spanish complaints, instead focusing on getting a handle on the large-scale outbreak.

In a statement from European health experts gathered in Brussels, the EU asked Germany to “take all necessary measures to move as quickly as possible to identify all the causes for the outbreak of the disease and the route of infection.”