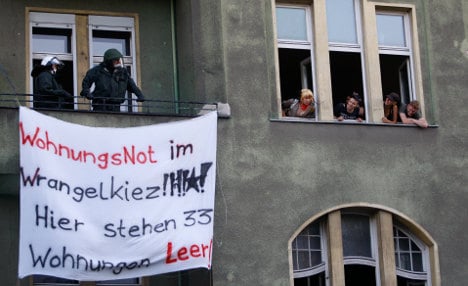 A group of 19 leftist activists on Monday occupied a previously empty property on Schlesisches Straße in Berlin’s trendy district of Kreuzberg with a banner proclaiming “Apartment shortage in the Wrangle neighbourhood!!! There are 33 empty flats here!” according to Berlin daily Der Tagesspiegel.

But following a complaint from the owners of the building, the housing association GSW, police moved quickly to prevent the house from becoming permanently occupied.

All 19 protestors were removed from the premises, as a crowd of over 100 people looked on. Six men and one woman were arrested and released a short time later.

Separately on Monday, a leftist group staged a protest during a press conference on the city’s latest rent price index. Wearing white masks and red hoodies, they unfurled a banner that read “This City Belongs to Us” to protest at rising rents, social displacement and gentrification.

Rents in the German capital have experienced a sharp hike in recent years, with the average cost of flat rising over six percent in the past two years.

Leftist groups have frequently complained that such developments will push out established tenants particularly in districts such as Friedrichshain-Kreuzberg, which also housed around 1.1 million of Berlin’s 9 million overnight guests in 2010. This marked an eight percent increase on 2009, according to news magazine Der Spiegel, and has led to anti-tourist sentiment in some quarters.

However, one of the many activist groups based in the district has taken an entirely different approach to the influx of tourists. Normally pilloried for being foreign symbols of gentrification, tourists are now being asked to get involved in protests against it.

“Converting a squatted building into a techno party can be fun for tourists too,” Cristina H. told the magazine. The 28-year-old is a member of a group making the motto “Tourists and Kreuzberg Residents Unite!” part of their action plan against gentrification and rising rents in the area.

The activists believe that the majority of the tourists who choose to stay in the area share their values and their feelings on the way the area is changing, given that the majority are from countries such as Britain, Spain and Italy, which currently have plenty of economic problems affecting young people.

“This part of town is popular for those who wants to experience the delights of Berlin cheaply, as most tourists here are young but don’t have much to spend,” fellow activist Jan P. told Der Spiegel. “So why shouldn’t they take part in protests against gentrification and displacement?”