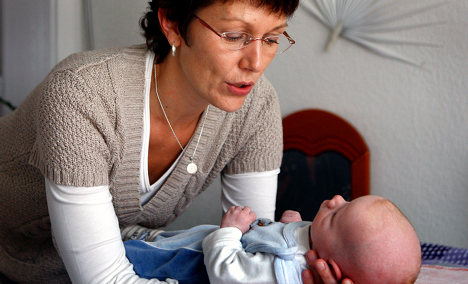 Der Spiegel magazine reported that 15 percent of midwives had in the last year given up core professional duties such as maternity care.

About 25 percent of Germany’s midwives are no longer working in maternity care, according to statistics from the country’s Association of Midwives.

Instead, many move into less risky and more lucrative fields such as offering yoga for pregnant women or courses in proper nutrition.

Midwives have been demonstrating in several cities including Berlin, Essen and Dresden, demanding higher pay. They say they want a 30 percent pay increase from Germany’s statutory insurance companies for many of their services.

Midwives receive around €224 ($322) for up to 11 hours’ work helping to deliver a baby. Follow-up visits from mothers earn midwives €26, no matter how long the appointments last.

Britta Höpermann, manager of the Geburtshaus Hamburg told Der Spiegel that the self-employed midwives she used often worked 60 hour weeks that left them with a net pay of just €8 to €9 per hour.

The average taxable income of a self-employed midwife was just €14,000, Der Spiegel reported.

Meanwhile insurance premiums have been increasing. Katrin Rüter de Escobar of the German Insurance Association said the medical mistakes were more costly now, driving up premiums, even though midwives make no more mistakes now than in the past.

“It is not a broken vase, but a child. And that costs money,” she said.

Edith Wolber of the Hamburg Midwives’ Association said she was in despair, despite many complaints to the federal government.

“The federal Health Minister has promised improvements, but nothing has happened,” she said.

A spokesman for the Ministry of Health, Roland Jopp, said progress was being made.

“We do a lot to accommodate the concerns,” Jopp said.

Officials are working on a report about the situation to determine what to do next.