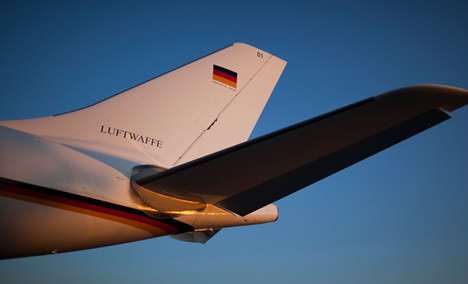 “This is something I have never experienced,” Merkel told reporters upon landing. “The pilots haven’t either.”

The chancellor’s plane Konrad Adenauer, had to circle over the Turkish-Iranian border region for more than two hours early Tuesday morning as the situation was sorted out. The plane was finally allowed to continue on its way at the last minute, shortly before it would have had to land in Turkey due to a fuel shortage.

The reasons for the incident were unclear, although Merkel has been highly critical of Iran’s human rights’ record and its alleged plans to develop nuclear weapons. Iran had given the green light for the overflight on Monday evening, according to the German government.

Another German government plane flew through the country without problems.

“Hindering the German chancellor’s passage over Iran is absolutely unacceptable. It shows a lack of respect towards Germany that we will not accept,” German Foreign Minister Guido Westerwelle said in a statement.

“That is why I have summoned the Iranian ambassador. We shall make it very plain that such a breach of international conventions will in no way be tolerated by Germany,” he added.

Iran late on Tuesday blamed a “technical problem” for closing its airspace to Merkel’s plane.

“The problem affecting the overflight of Iranian airspace by German Chancellor Angela Merkel’s plane was caused only by a technical question that was immediately resolved and it was able to continue,” the Foreign Ministry said.

“The necessary authorisations were given for her plane to transit Iranian airspace, and the German embassy was informed of this,” the official IRNA news agency quoted ministry spokesman Ramin Mehmanparast as saying.

Merkel, who is seeking improved trade between Europe’s biggest economy and booming South Asia, met Tuesday with Indian Prime Minister Manmohan Singh and President Pratibha Patil during a one-day stop in the Indian capital as part of an Asian tour that will also take her to Singapore.