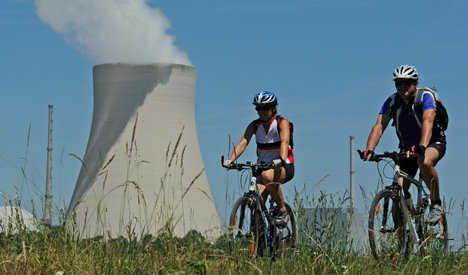 Merkel said the “fundamental” rethink of energy policy in the world’s number four economy, prompted by the disaster in March at Japan’s Fukushima plant, opened new opportunities for business and climate protection.

“We can be the first major industrialised country that achieves the transition to renewable energy with all the opportunities for exports, development, technology, jobs it carries with it.”

Yet neighbour France, while saying it “respected” the German position, insisted it was not ready to give up nuclear energy which Prime Minister Francois Fillon described as a “solution for the future”.

“We think that for some decades at least we will not be able to do without nuclear energy,” added Foreign Minister Alain Juppe.

The German plan, hammered out by Merkel’s ruling coalition in marathon overnight negotiations, will see the country shutter all 17 of its nuclear reactors, eight of which are currently off the electricity grid, within 11 years.

“We learned from Fukushima that we have to deal differently with risks,” said the chancellor, whose popularity suffered over her earlier pro-nuclear stance.

Seven of the eight reactors already offline are the country’s oldest, which the government shut down for three months pending a safety probe after the Fukushima emergency.

The eighth is the Kruemmel plant, in north Germany, which has been offline for years because of technical problems.

Six further reactors will shut down by 2021 and the three most modern will stop operating the following year 2022.

Monday’s decision, which could run into legal challenges from energy companies, means Germany will have to find the 22 percent of its electricity needs that were covered by nuclear power from other sources.

A draft implementation plan to be debated next week would focus on hiking energy efficiency to reduce electricity use, building new power plants fired by greenhouse gas emitting natural gas and coal, expanding the production of wind energy, and improving the supply network from wind farms.

site for the highly radioactive waste and slashing CO2 emissions.

demonstrations next month to demand a faster phase-out.

France, meanwhile, said nuclear power allowed the country with its 58 reactors to provide electricity at prices about 40 percent cheaper than other European countries, on average.

Sweden said the German decision would lead to a disjointed energy policy that failed to adequately address climate change.

Poland and nuclear-free Austria, however, welcomed the German move.

“This decision by a highly industrialised country will have a very strong signal effect. It shows that scrapping nuclear power is both possible and feasible,” said Austrian Environment Minister Nikolaus Berlakovich.

And Poland, considering launching its first nuclear power station in 2020, said it would rethink its plans.

The United States and Britain have announced plans to build new reactors as an alternative to producing harmful greenhouse gas emissions.

Italy scrapped nuclear power in 1987, one year after the Chernobyl disaster, while Switzerland said last week it would phase out atomic energy by 2034.