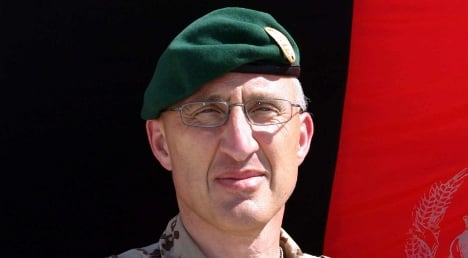 “The soldiers here and I as their commander have the very clear task of bringing peace and security to this country together with our Afghan partners,” the 55-year-old wrote in a statement to international ISAF troops, according to news magazine Der Spiegel. “I will fulfil these expectations.”

Kneip was mildly injured on Saturday when he was hit by shrapnel from a suicide bomb-blast inside the governor’s palace in Takhar provice, where a delegation of Afghan politicians and high-ranking soldiers was meeting with Bundeswehr officers.

Two German soldiers were among the six people killed in the blast, including the police chief for northern Afghanistan, Gen. Mohammed Daud Daud.

One of Kneip’s bodyguards and another of his close colleagues were killed in the blast. Several Bundeswehr soldiers were injured, including a female interpreter. She was in a “critical condition,” the Bundeswehr announced late on Sunday.

In his statement, Kneip described the moment of the blast. He had been having “very good, forward-looking talks” with the governor, high-ranking Afghan military personnel and the police chief Daud.

The group then left the conference hall on the second floor and gone downstairs to a hall.

There was suddenly a “tremendous explosion in our immediate vicinity,” he wrote. “Two soldiers from my close working circle were killed others were hurt, some seriously.”

He wrote that he had worked “every day with these wonderful people” and said his thoughts were now with their families.