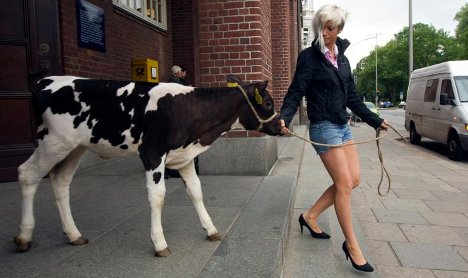 About 25 women from across Germany were invited to participate in the casting for the calendar at the Hamburg Chamber of Trade.

“We want to show that there are beautiful, modern women living in rural Germany, and not just the stereotypical country bumpkins,” said Peyman Amin, a casting judge who also sat on the jury of Heidi Klum’s television series “Germany’s Next Top Model.”

The only condition for the women participating is that they must be directly involved in agricultural life.

“Authenticity is most important,” Amin said. “These women are all capable of milking a cow or ploughing a field.”

Women hailing from farms not only in northern Germany, but also Hesse and the Rhineland-Palatinate flocked to Hamburg hoping to turn their pin-up dreams into reality.

Click here for a photo gallery of the calendar casting

In the cool, bare setting of the chamber of commerce, the women showed off plenty of skin, in some cases revealing to the cameras the tattoos adorning their bodies.

Claudia learned about the casting from her mother-in-law, who had read about it in the newspaper.

“I went ahead and sent a photo of me sitting on a cow, and I was then invited to the casting,” she explained.

Click here for a photo gallery of the last calendar

After Hamburg, a second casting will take place in Munich. The top 13 candidates will then be chosen, one for each month and one to grace the calendar’s cover.

But looks aren’t the only criterion judges will use to choose the lucky 13.

“The decisive factor is charisma,” said project manager Nathalie Rehak of the Swiss firm Magic Fox Media, which is publishing the calendar for the first time.

For the 2012 edition, the women will use the paintings of old German masters, such as Otto Müller, Albert Anker and Egon Schiele, as inspiration for their own poses.

The perfect dimensions of a model are not absolutely necessary, Rehak added.

“After all, our candidates sometimes need to carry a pig or a calf. For a person weighing only 50 kilogrammes, that’s not an easy thing to do.”