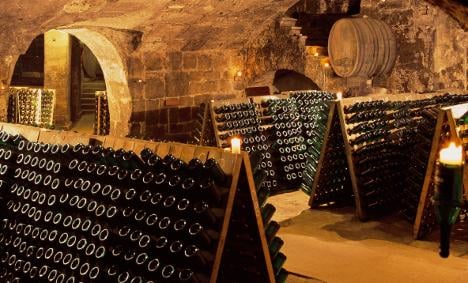 Once the preferred tipple of Queen Olga of Württemberg, Chancellor Konrad Adenauer and even Hollywood legend Errol Flynn, Kessler Sekt eventually slipped into relative obscurity for a few decades. But it is enjoying a revival thanks to a renewed focus on its proud traditions.

Bubbly like German Sekt has been around as long as regular wine. The second fermentation producing the carbonation can occur naturally if the temperatures and storage allow, and there are even ancient Roman and Greek accounts of effervescent wine. But it wasn’t until the 1700s when sparkling wine production truly took off.

Everyone knows how territorial the French are about their beloved Champagne, but actually William Shakespeare has been indirectly credited with the naming of German Sekt.

Shakespeare’s character Falstaff in his play “Henry IV” orders a Portuguese wine popular in England in the late 1500s with the line: “Give me a cup of sack, boy.” This apparently inspired German actor Ludwig Devrient to use the phrase in a Berlin wine bar in 1825, according to Kessler Sekt’s communications director Eberhard Kaiser – but the waiter assumed Devrient was referring to Champagne.

A year later, in 1826, industrial entrepreneur Georg Christian Kessler (1787-1842) set up shop in Esslingen am Neckar near Stuttgart. Having worked for French Champagne maker Veuve Clicquot for many years, Kessler was eager to bring sparkling wine to Germany. His goal was not to copy French bubbly, but to offer a distinct beverage using German soils and grapes. Shortly after its debut, Kessler Sekt was being enjoyed by German kings and queens and winning international awards.

His Sekt enjoyed huge early success and was shipped all over Europe and as far as the US East Coast. When Kessler died in 1842, the company was passed along to his personal friend, Carl Weiss, and the Weiss family went on to lead the firm until 2004. At that point, the firm was suffering because, as Kaiser explained, “the spirit of Kessler was lost.” This led to insolvency and a relaunch in 2005. While the business changed hands, production never stopped, and the company today is enjoying a renaissance.

Germans enjoy the highest per capita consumption of sparkling wine in the world, so it is no surprise that smaller producers like Kessler take great pride in maintaining their traditions and quality. New owner Christopher Baur has helped the firm regain its footing by infusing tradition with a touch of modernity, said Kaiser.

“The quality is the same, but the style is different, and we’re using new techniques to bring out the flavours,” said Kaiser.

Some of the machinery at Kessler has been updated, but traditional methods still prevail when it comes to fermentation. This is one of the few places in Germany where sparkling wine is still produced the old-fashioned way with in-bottle fermentation, and visitors can catch glimpses of workers hand-turning the wines in the 13th Century, mould-riddled cellars.

Most of the larger Sekt producers have switched to the less labour-intensive method of second fermentation by placing the wine into large tanks. In fact, smaller, high-end producers like Kessler account for less than ten percent of the German market. This, of course, comes at a price: While an average bottle of Sekt will set you back about €3, Kessler’s range starts at €6.50.

A regional favourite, 60 percent of Kessler Sekt is sold locally. But demand for the traditional bubbly is also growing outside of Swabia.

A tour of Kessler’s Speyrer Pfleghof headquarters includes the woody, 16th-century interior upstairs, as well as the production area with conveyors, forklifts and stacks upon stacks of fermenting wine on display.

But it’s when you descend the candle-lined steps into the cellars, however, that the history of the place comes alive. There, bottles are hand-turned during the second stage of fermentation, just as they would have been in 1826. Having built up a thirst, visitors then get to taste three different varieties of Sekt.

The most popular are the traditional Kessler varieties, but with the help of their young vintner, Markus Krieg, the firm has also launched limited editions based using Riesling and Pinot blanc.

CHRISTMAS
Amazon workers across Germany go on strike for higher wages in build up to ‘online Xmas’
Url copied to clipboard!