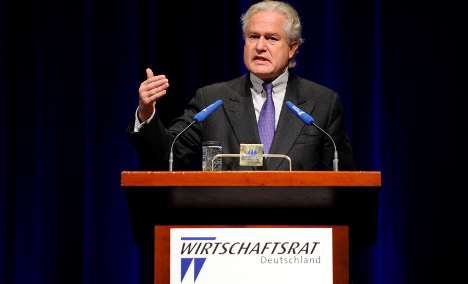 Angela Merkel’s government got poor marks in a survey of members of an ‘economic council’ closely associated with her own Christian Democratic Union.

The CDU Wirtschaftsrat, which boasts it offers its members the chance to help shape economic policy, asked 2,500 of its 12,000 members what they thought of different business initiatives.

And coalition partner the Free Democrat Party was shown to be even less popular, despite its tag of being business friendly – 76 percent of those asked said they were less than happy or not at all happy with their policies.

Yet the economy is performing well, and the closely-tracked Ifo index of business confidence has held steady after two months of falls, with growth broadening on stronger domestic demand.

The Ifo index was unchanged at its new level of 114.2 points as companies assessed their current situation positively and the research group adopted a new methodology that now uses 2005 instead of 2000 as the base year.

Analysts polled by Dow Jones Newswires had forecast a decline to 113.7 under Ifo’s new accounting method, after peaking at 115.4 in February.

The data underscored improvement in the retail sector, which along with official statistics released earlier in the day pointed to a widening of German growth beyond the traditional export pillar.

“This should facilitate the sustainability of the recovery into the second half of the year and puts Germany in an enviable position among its developed world peers,” noted Chris Williamson, chief economist of the Markit research group.

Among German retailers, “the business climate index has risen markedly. The business situation of the retailers has clearly improved,” Ifo said. Two sub indices showed that the roughly 7,000 companies polled enjoyed better current conditions, with a reading of 121.4 points compared with 121.0 in April.

Expectations for the coming six months were “somewhat dampened” at 107.4 compared with 107.7, but remained positive nonetheless.

The poll was released after data from Germany’s national statistics office showed that first quarter growth of 1.5 percent was based more on domestic demand than on the country’s much vaunted export sector.

The first quarter jump from the last three months of 2010 surprised analysts and caused many to revise their 2011 German growth estimates up to 3.0 percent or more, compared with the official forecast of 2.6 percent.

“The German economy will most probably show a better economic performance than the rest of the eurozone for some years,” Commerzbank chief economist Jörg Krämer added.

According to Goldman Sachs economist Dirk Schumacher, economists expect the German economy to slow later this year, but “the May Ifo (reading) suggests that the economy is indeed only facing a moderation in the near term and nothing more.”